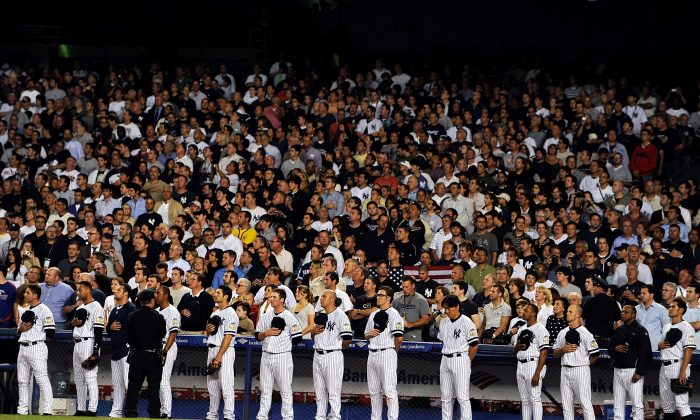 The New York Yankees stand at attention as God Bless America is sung during the seventh inning stretch at the last regular season game at Yankee Stadium on September 21, 2008 in the Bronx borough of New York City. Al Bello/Getty Images
Viewpoints

So, the New York Yankees and the Philadelphia Flyers have decided to end their decades-long tradition of playing the late Kate Smith’s (1907–1986) version of the song “God Bless America” at their games.

Fine. Maybe it is time for those sports venues to try something newer and fresher.

In the Flyers’ case, with Smith’s rendition having been chosen decades ago as a good luck charm, they probably were already looking for a more efficacious talismanic tune anyhow.

But the actual reason why the Yankees and Flyers ditched Smith was a disappointing and pusillanimous concession to political correctness. Smith has become persona non grata for having recorded a couple of songs back in the 1930s that were about “darkies” and “pickaninnies.” Yuck! Such churlish words seem surreal today, but sadly, such language was quite common in our country several generations ago.

We should be grateful that those obnoxious songs faded into well-deserved obscurity long ago. Or, at least, they were obscure until just recently. One of the ironies of making a current issue out of those songs is that Smith’s denouncers have given them new life and publicity by resurrecting them decades after they died out from the public’s consciousness.

Why dredge up past ugliness? Who benefits? Does anyone really believe that when the sports crowds heard Smith singing “God Bless America,” it made them think of racially insulting songs? I’ll bet that not one person in a thousand at the ballpark or hockey arena even knew those songs existed. (I know I didn’t, and I’m no spring chicken.)

What is the individual or small cadre who made an issue of Smith’s forgotten songs hoping to accomplish? Do they want to sanitize our country’s past? Sorry, it can’t be done. The United States was plagued with racist attitudes in the 1930s that seem absurd and shockingly unenlightened today. It seems to me that our energies should be focused on making a better world today rather than looking for ways to censure long-deceased 20th-century Americans for tacky language that (regrettably) wasn’t unacceptable in that time.

One problem with trying to settle scores with dead Americans guilty of committing racially offensive actions is that you will never run out of targets. Indeed, like Captain Ahab in “Moby Dick,” such a pursuit could become a destructive obsession. I see this tendency today in people who are more upset that there was slavery in America 150 years ago than they are with the existence of slavery in parts of Asia and Africa today.

Banning Smith’s “God Bless America” (which, by the way, honors America, not Smith) means that, to be consistent, the zealous individuals who demanded her removal from the public square will have to demand the condemnation and banishment of countless other dead white Americans who said or did things offensive (or far worse) to earlier generations of African-Americans.

Let’s look at a couple of examples.

A famous American publicly stated the following: “I am not nor ever have been in favor of making voters or jurors of negroes, nor of qualifying them to hold office, nor to intermarry with white people; and I will say in addition to this that there is a physical difference between the white and black races which I believe will forever forbid the two races living together on terms of social and political equality. And inasmuch as they cannot so live, while they do remain together there must be the position of superior and inferior, and I, as much as any other man, am in favor of having the superior position assigned to the white race.”

Is that racist enough for you? Well, that was Abraham Lincoln, in September of 1858. If Smith deserves to be banned, then surely justice demands that we remove Honest Abe from $5 bills and pennies, and then convert the Lincoln Monument to some worthier cause.

And then, there is the late U.S. senator from West Virginia, Robert C. Byrd (1917–2010). Sen. Byrd once belonged to the Ku Klux Klan. Surely, that is a far more egregious offense than recording a couple of stupid songs. I expect to hear the progressives who targeted Smith to demand that the several dozen public buildings and highways named after Byrd be renamed. We don’t want to preserve memorials to ex-Klansmen, do we?

The tone underlying the banishment of Smith from Yankee Stadium and the Flyers’ Wells Fargo Center are ominous and McCarthyesque. The Flyers actually took down their statue of Smith. Is the intent to turn her into a nonperson as the Soviet communists did to their enemies? Will those who agitated to ban Smith launch a new Inquisition, summoning thousands of dead Americans before their self-appointed tribunal to determine, “Did you ever use a racially derogatory term or hold any racist opinions at any time in your life?”

And what about those people in the Yankees’ and Flyers’ organizations who caved in so readily to the complaints of a small number? Why didn’t they show respect for their fans by polling them about whether they wanted to keep or replace Smith’s “God Bless America”? It seems to me that they acted on the basis of shortsighted expediency.

Why give positive reinforcement to people who apparently want to wield power, not only over the present and the future, but even the past? Such characters can’t be appeased. On the contrary, their success in banning Smith will encourage them to embark on a quixotic quest, going around tilting at windmills as they try to settle scores with ghosts.

There’s no denying that our country had a horribly racist past. But should we not learn from and transcend our history instead of trying to erase it? There’s far more racial tolerance and acceptance today than before, and the trend is moving in the right direction. Let’s be grateful for progress already made, but also remember that fallible human beings will not be error-free.

We will never completely eradicate racist nonsense, but we must keep striving for that goal.