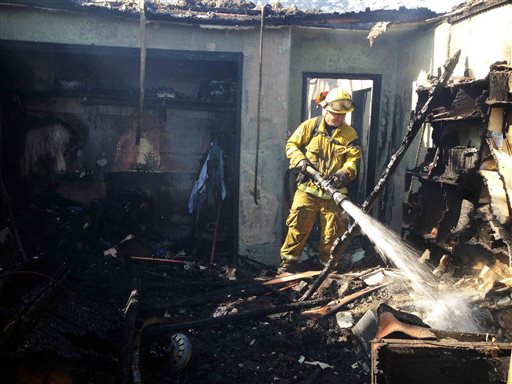 A firefighter puts out the remaining hot spots in the one building that has burned as a result of a brush fire burning in the hills above Banning, Calif., on Wednesday, May 1, 2013. (AP Photo/The Press-Enterprise, Terry Pierson)
US

Banning fire today: The fire, which spread to nearly 3,000 acres on May 1, is now more contained, but still a danger to spread even more.

The fire spread to 2,956 acres, and is 40 percent contained, according to the Riverside County Fire Department.

At least 425 firefighters worked on containing the fire yesterday and 400 are still working to gain control of the fire today. Four helicopters and one air tanker are making water drops, down from six of each on Wednesday.

Renewed winds gusting to 40 mph could halt the progress made on halting the fire.

A stand from firefighters came too late for Joe Kiener, 53, who lost the house he had lived in since his mother bought it in the 1970s.

Kiener was home on a lunch break when he stepped outside to check on his barking dog and saw heavy smoke approaching. He took the dog and started to leave just as a deputy arrived to tell him to evacuate.

“When I left I went around the corner and I got engulfed in a big cloud of smoke,” said Kiener.

He got out safely, but the next time he saw the house was in a cellphone picture sent by his neighbor. The roof was on fire, and he knew it would be destroyed, but he shrugged off the loss.

Two firefighters have been injured during the fire, according to the Press-Enterprise, a local newspaper. One is in the hospital with a burn from a flareup; another hurt his knee while cutting containment line. Both injuries are minor.

Fire officials told the Press-Enterprise that this is just the beginning of what could be a long season.

“This is an early season fire that burned like it was in the fall,” Cal Fire Southern Division Chief Dale Hutchinson said.