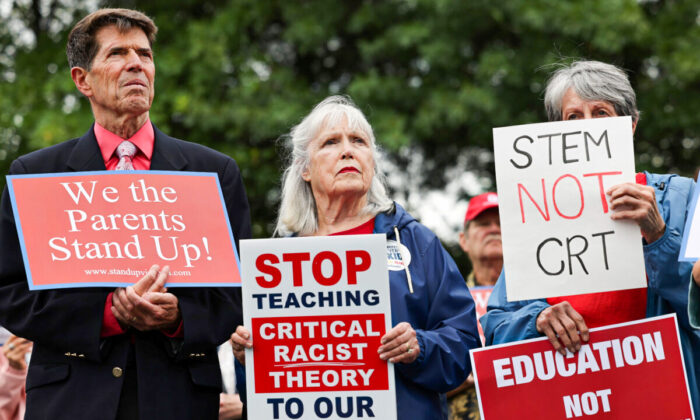 Opponents of the academic doctrine known as critical race theory protest outside of the Loudoun County School Board headquarters in Ashburn, Va., on June 22, 2021. (Evelyn Hockstein/Reuters)
Viewpoints

Banning Divisive Concepts in Higher Education: The Next Frontier for Texas and Other Patriotic States

Texas is a leader among states in passing strong legislation designed to ensure that K-12 schools cannot easily indoctrinate students with dangerous critical theories. Its newly amended law, SB3 (pdf), ensures that protections against indoctrination extend to all courses, not just social studies. In addition, it passed the “American Patriotism” bill.

But despite its leadership in the K-12 area, there’s a glaring hole when it comes to protections for college and university students. Texas legislators might want to take a close look at Tennessee, which has recently passed legislation that protects students and employees in higher education from forced participation in activities that advance a particular ideological agenda. The bill contains the prohibited concepts banned in K-12 education that have come to dominate university campuses, stifling free speech and viewpoint diversity.

Here’s why Texas needs to act. Consider the work of the Austin-based Texas Higher Education Coordinating Board. It’s pushing an aggressive Diversity, Equity, and Inclusion (DEI) agenda that’s heavily steeped in critical race theory (CRT) as evidenced by its work on the Lee College DEI Survey. The intent and focus of the materials point toward potentially glaring violations of the Civil Rights Act of 1964, legislation that ended segregation in public places and prohibited discrimination on the basis of race, color, religion, sex, or national origin.

Many colleges and universities openly push and encourage segregation, along with lower standards for racial minorities. We have a situation in America in which aggressive DEI/CRT policies openly discriminate against orthodox Christians, white heterosexual males, and females who are said to benefit from undeserved privileges. DEI gets diversity and inclusion wrong. It does the opposite of what the acronym implies.

Diversity is no longer about bringing together people from divergent backgrounds and cultures and allowing them to learn from each other. The emphasis now is on airing grievances and segregating people into their own affinity groups that often become gripe sessions. Lowered academic standards adopted to achieve “ideal” numbers often results in the admission of unhappy, unprepared students who are understandably miserable.

Equity no longer means equal opportunity. It now means equal outcomes regardless of the level of effort put forth by those who fall into the proper demographic (as defined by what white progressives are seeking on a given day).

Inclusion isn’t about creating healthy learning and work spaces but is now about empowering and enabling affinity groups to make demands that are often contrary to the mission and best interests of the organization. DEI no longer has the goals once associated with affirmative action laws meant to create opportunities for disadvantaged persons. The definition of disadvantaged has changed, and so has the description of the claimants and their demands.

CRT and DEI aren’t the most effective methods to achieve racial healing and reconciliation. In fact, they are harmful concepts dangerous to all Americans, regardless of their race and ethnicity. This means that it’s important for legislators and other leaders to understand exactly what they’re dealing with and not allow emotionalism to cause them to ignore the rights of students, teachers, and other employees who find their rights trampled.

DEI is CRT in action. CRT is a worldview rooted in cultural Marxism, postmodernism (which denies objective truth), and Critical Legal Studies. As Christopher Schorr and I pointed out in “Black Eye for America,” CRT is a racist worldview predicated on the claim that racism is in the DNA of American institutions and society. It sees white people as oppressive beneficiaries of undeserved benefits, who have structured society to enrich and empower themselves. All racial and ethnic minorities are infantilized as helpless victims of systemic racism. CRT is just one of several critical theories that include Gender, African American Studies, Feminism, Postcolonialism, and Queer Studies. Unfortunately, it has also permeated governmental agencies and institutions that were once recognized as shining examples of successful affirmative action—such as the U.S. military, for example, which has created opportunities for millions of racial minorities, immigrants, and working-class whites.

Where does this leave Texas and the rest of America? We have our work cut out for us. We need to fight on all fronts. E. Pluribus Unum (Out of Many, One) is the approach that will bring healing and reconciliation. We should not allow aggressive political and racial minorities to hold our institution hostage by using lies and threats. What will save America is a principle-based approach that recognizes the wrongness of shaming and bullying people because of their race, ethnicity, social class, sex, or nationality. We can and should be equal under the law. Everything we need to save our nation and states is already in our possession.

As the Model School Board Language states (pdf): We need to prohibit the “teaching and promotion of critical race theory, divisive concepts, and other forms of government-sanctioned or -facilitated racism … and to uphold the foundational American principle that all people are created equal and are endowed by their Creator with unalienable rights to life, liberty, and the pursuit of happiness.”