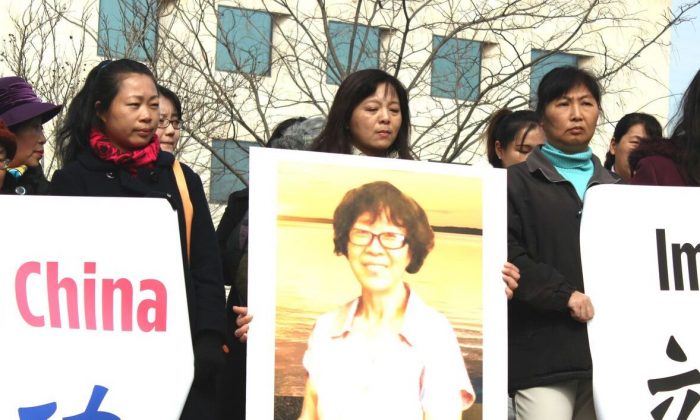 Karen Xu on March 3, 2016, holds a poster of her mother, Wang Sirong, who is currently being held at a detention center in Tianjin. (Minghui.org)
China

A uniquely cheerful form of protest in China—the hanging of banners containing a New Year’s greeting even as it imparted a human rights message—has resulted in three women being detained by police in the city of Tianjin.

The daughter of one of them, Karen Xu, a resident of Washington, D.C., is a sales representative for the Chinese version of this publication.

My mom is old. I worry what will happen to her if she’s locked up for long.
— Karen Xu, Epoch Times

“My mom is old. I worry what will happen to her if she’s locked up for long,” Xu said in a telephone interview. “My mom might be like those who are tortured to extract a confession, or forced to abandon her beliefs,” Xu said.

Her mother, Wang Sirong, 65, is a retired public servant and a practitioner of Falun Gong, a traditional Chinese practice of meditation and moral teachings that has been persecuted in China since 1999. She and three other Falun Gong practitioners were hanging banners in central Tianjin, a port city in the northeast of China, on Feb. 8.

Given that it was the Lunar Chinese New Year, the banners contained festive messages, along with a positive message about Falun Gong. “Greetings. Practitioners of Falun Dafa Wish Tianjin Residents a Happy New Year. Please Remember Falun Dafa Is Good. Truthfulness, Compassion and Forbearance Is Good,” one of them said. Falun Dafa is another name for Falun Gong.

Based on surveillance footage, police tracked down all four of them, and on Feb. 13 ransacked their homes and detained them all, Xu said. Wang was taken to the Nankai Detention Center.

Wang suffered osteoarthritis and other ailments when she began performing Falun Gong exercises in 1997; she quickly recovered her health and has been active in exposing the Communist Party’s persecution of the practice for the last nearly 17 years.

Others have not been as fortunate to escape detention for so long. In a recently reported case, a Chinese woman was arrested 9 times in 14 years for her practice, and attempts to raise awareness about the persecution of, Falun Gong.

Xu held a rally in front of the Chinese Embassy in Washington on March 3, part of an effort to raise awareness about her mother’s detention. “I was shocked when I heard the news. It seemed like it was only a few days ago that mom told me on the phone that I must take good care of myself.”

“I call on the Tianjin police and government to unconditionally release my mom Wang Sirong and three others Falun Dafa practitioners who have been illegally detained,” Xu added.

She and her peers are attempting to bring the matter to the attention of U.S. officials, whose efforts are often decisive in determining the outcome of such cases of persecution.

Ge Min, a spokeswoman for the Falun Dafa Association of Washington, D.C., a voluntary group that interfaces with government on behalf of Falun Gong practitioners, said at the rally: “These illegally detained Falun Gong practitioners have not committed any crimes. They are simply trying to be good people, following the principles of truthfulness, compassion and forbearance.”

According Minghui.org, a Falun Gong website that carries voluminous first-hand information about the persecution, 735 practitioners have been abducted between Jan. 1 and Feb. 5 this year, with 16 of them being taken away in Tianjin.

In China, getting an organ is just as easy as buying vegetables in the market.

The location was particularly troubling to Xu, given a recent expose of the vast scale of organ transplantation, for profit, at the Tianjin First Central Hospital recently. Many of the organs transplanted by the hospital are believed by researchers to have come from Falun Gong detainees.

“On the surface, organ harvesting does not exist in China,” Xu said in a telephone interview. “However, in China, getting an organ is just as easy as buying vegetables in the market.”

Xu moved to the United States in 2009 primarily to avoid persecution, given that she is also a practitioner of Falun Gong. The whereabouts of the three individuals arrested along with her mother—Li Xiaohe, Li Xiaoxiao and Xing Wei—remain unknown.