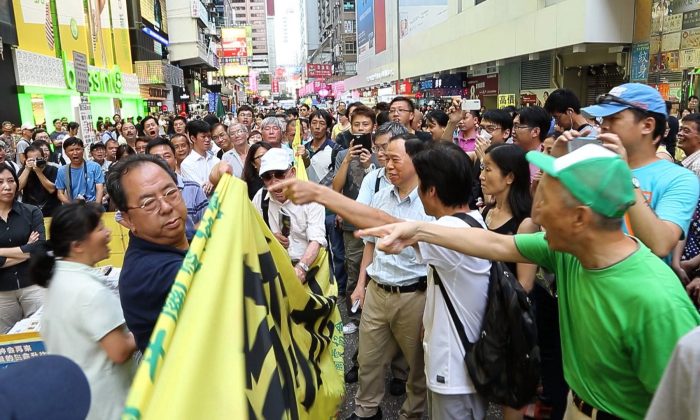 Lam Kwok-on, left, is pointed out by onlookers, after attempting to use his banner to block those belonging to Falun Gong practitioners. The altercation between the Communist Party front group and Falun Gong practitioners is the first major incident since the authorities cracked down on the HCKYCA's banner presence in Hong Kong. (Pan Zaishu/Epoch Times]
China

For three hours on June 2, members of a Chinese Communist Party front group in Hong Kong engaged in a street struggle with Falun Gong practitioners in a busy thoroughfare, while an increasingly frustrated public came to eject and curse them and the police did little.

The crowd swelled to over a hundred at various points during the incident, many taking photos, while others pointed and laughed, and mocked the efforts of the front group to stifle the Falun Gong protest.

Practitioners of Falun Gong, a Chinese spiritual practiced persecuted in the mainland, have for years in Hong Kong been protesting against the suppression of their faith in China, typically by holding banners depicting scenes of torture, or carrying messages about the practice and its treatment. Beginning last year, a front group from China, calling itself the Hong Kong Youth Care Association (HKYCA), sought to disrupt their activities. The HKYCA’s ties to Party organizations and officials in China are well-documented, including sharing the same office and staff with a city-level 610 Office, an extralegal task force set up over a decade ago to persecute Falun Gong.

After the number of banners the HKYCA had placed around Hong Kong became overwhelming earlier this year, the authorities launched a crackdown, and the group’s activities quietened down. The latest incident, at a busy shopping thoroughfare called Sai Yeung Choi Street, is the latest large-scale altercation since the banner crackdown.

It took place after HKYCA members arrived at a Falun Gong protest site, intending to unfurl their banners directly in front of it and the practitioners there, to block the public from seeing them, and presumably irritate the participants. The latter called the police, who arrived but declined to get involved.

Passersby and residents, seeing that the Falun Gong group was being surrounded by HKYCA members, dressed as usual in their lime-green polo shirts, were angered, calling out words of support, and in some cases pulling the HKYCA members away.

“I have never seen such bullies. Their behaviors are getting more and more crazy, messing up the whole community,” said Mr. Chen, a passerby.

“There is no reason to block them [the Falun Gong],” one resident yelled out “Is this reasonable? These people are henchmen of Leung Chun-ying!” Leung is the current chief executive of Hong Kong, and is thought by many Hong Kongers to have ties to certain high-level leaders in the Communist Party, including Jiang Zemin, a former regime chief who initiated the persecution of Falun Gong. Another resident chipped in, “There is no longer freedom of speech!”

Yet another called out: “It is like someone is trying to do business, and you block in front of them. Is that civilized behavior? Isn’t it just like the Chinese Communist Party?”

Residents also expressed their dissatisfaction at the failure of the police to intervene – for example, by asking the HKYCA members to stake out another area of the street where they could make their views known, rather than actively block the Falun Gong booth.

The dispute began at 4pm on June 2 and continued for about three hours, with some bouts of shoving, mostly by passersby against HKYCA members; at various points onlooker started yanking the HKYCA banners away from them.

At perhaps the climax of the afternoon, Lam Kwok-on, the vice president of the HKYCA who was standing to the side, suddenly rushed into the melee and held up a huge banner to block one of the main Falun Gong banner’s. Onlookers then became even angrier, and themselves rushed in to pull his banner down, while yelling at the police to arrest him. One middle-aged man there called out “You’re such a low-life. Down with Chinese Communist Party,” while trying to pull away Lam’s banner.

Translated by Quincy Yu and John Wang. Written in English by Matthew Robertson.