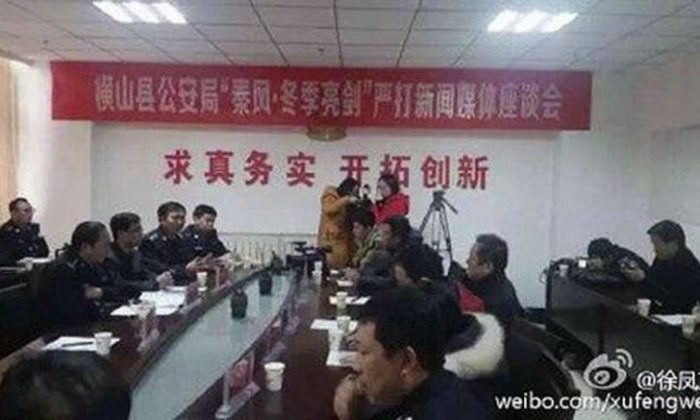 An image of the meeting by the security officials in Hengshan, Shanxi Province on Feb. 1 (Sina Weibo)
China

Banner at Official Conference in China Calls for Crackdown on Press

Security officials in the county of Hengshan, Shanxi Province, were much more direct than is typically expected about their designs on the news media in China— than would typically be expected, at a forum on Feb. 1: They hung a banner across the wall declaring the need to “strike hard against the media.”

That China has no freedom of speech is well-known, and the persecution of journalists and bold Internet users has become a part of life for many—but censorship is typically carried out covertly, so the brazenness of the statement was surprising, even in China.

Photographs of the offending banner quickly went viral and were reported in overseas Chinese media.

Overwhelmingly on Sina Weibo, China’s Twitter-like service, netizens said that the security officials had accidentally told an unspoken truth—that one of the security bureau’s tasks was to silence the press.

“This is a terrifying reality in China,” wrote an Internet user in Beijing. For another netizen in Fujian Province, the revelation did not come as a surprise. He or she wrote “The Chinese Communist Party were bandits to begin with.”

A netizen from Henan Province provided a different read on the story, writing: “Crackdown on People’s Daily, Global Times, and CCTV—that would be a crackdown well done.”

The security authorities in Hengshan have since issued an apology to the press, saying that there should have been an “and” between the words “strike hard” and “media.” A careless staff member made the error, they said.

But the apology fell on deaf ears online. “First you said what was really on your mind, then you said you weren’t careful. This isn’t much of a cover-up,” wrote as user on Sina Weibo.

“It doesn’t make any sense when adding the missing word ‘and,'” wrote a netizen from Sichuan. “Without ‘and,’ it makes perfect sense.”