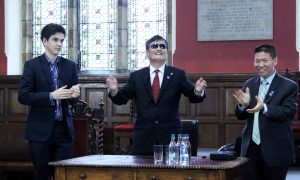 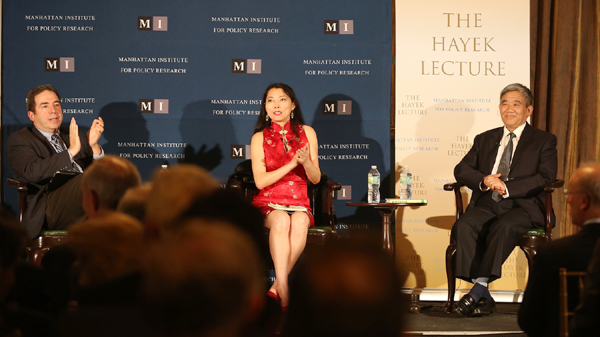 Chinese author Yang Jisheng (R) attends the Hayek Prize forum at the Manhattan Institute with interpreter Rose Tang (C) and moderator Russell Roberts (L), a research fellow at Hoover Institute. At the event, Yang Jisheng said that while the Chinese authorities acknowledge that there was a great famine, they blame it on natural causes and foreign creditors. (Du Guohui/The Epoch Times)
China

The book award is given by the libertarian-leaning think tank to acknowledge recent works that “best reflect Hayek’s vision of economic and individual liberty.” It comes with a $50,000 cash prize.

Chinese journalist and historian Yang Jisheng’s book, “Tombstone,” was published in English last year; it is a comprehensive account of the Great Chinese Famine from 1958 to 1962, during which his father starved to death among over 36 million other peasants.

At the time, Chairman Mao attributed the tragedy to “the three years of natural calamities,” but Yang, through his own experiences and 15 years of research while working for Xinhua, learned the truth­: to exponentially increase grain and steel production during the so-called Great Leap Forward, Mao expended the lives of countless rural workers.

As grain was sent to the cities and abroad, Chinese in the countryside were prevented from leaving to find food. Desperate, they tried to subsist on things like clay, elm bark, and bird droppings; some parents even ended up eating their own children.

“Mao’s powers expanded from the people’s minds to their stomachs,” Yang recently told the Wall Street Journal. “Whatever the Chinese people’s brains were thinking and what their stomachs were receiving were all under the control of Mao. . . . His powers extended to every inch of the field, and every factory, every workroom of a factory, every family in China.”

In his 1944 book “The Road to Serfdom,” Austrian economist and philosopher Friedrich Hayek had called this approach the “fatal conceit” of socialism, contrasting it with a free market, which allows producers to match prices to consumers’ preferences without coercion or waste of human and natural resources.

Hayek’s book was translated into Chinese in 1962, but could only be read by Party leaders wanting to study a critique of socialism. Years later, a censored version became available to the Chinese public, which greatly influenced Yang’s thinking on events that had unfolded since the Mao era.

Manhattan Institute founder Sir Anthony Fisher spoke with Hayek on how to reverse the erosion of freedom, who advised beginning “on the battlefield of ideas.”

In “Tombstone,” Yang said that the totalitarian regime was the root cause of the famine. In a more open system, people would have realized immediately, and leaders would have modified mistaken policies, he said.

Although he supports democracy and freedom of information, Yang questions how soon these can come to China while the Communist Party still holds power.

“If a people cannot face their history, these people won’t have a future,” he told the Journal. “That was one of the purposes for me to write this book. I wrote a lot of hard facts, tragedies. I wanted people to learn a lesson, so we can be far away from the darkness, far away from tragedies, and won’t repeat them.”