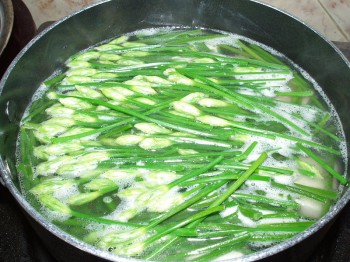 Changli County in Hebei Province is famous for its garlic chives. Most of the chives are sold to Beijing, Tianjing and Northeastern China. To increase yield and profits, almost all the farmers heavily spray the chives with banned pesticides.

Luo Fei, a farmer from Wangbeizhuang Village, told The Epoch Times that highly toxic and banned pesticides such as 3911 (phorate), 1605 (methyl parathion) and iron mike (aldicarb) are still available in the countryside, most likely produced by underground factories. 3911 is the most toxic pesticides; its residual toxicity can last for two years.

Luo said that pesticide contaminated chives could cause nausea, dizziness, and diarrhea. If consumed in large quantity, it could be life threatening, causing cancer and blood diseases.

Zhang Zhi, another farmer, told The Epoch Times that their farms are called “Green Vegetable Planting Base,” but they are actually all polluted.

“Can it be called green? No. If it were green, the production would drop. We all count on it to make a good living,” Zhang said.

Zhang explained that in order to kill insects, they spray 3911 every eight or 10 days. All garlic chives farms do it that way, he said.

“I would suggest consumers not eat too many of these chives. Our local farmers don’t eat these chives. We plant a little bit separately just for our own use,” Zhang said.

Another farmer said it’s all about money. Chives without pesticides look gray and yellowish, while the ones treated with pesticides are big, green, and strong, and can be sold for twice as much.

Mr. Yang from Zhongzhuozhuang Village said after spraying the pesticides, one is supposed to wait for a while before cutting the chives and putting them on the market. One should wait at least 10 days before consuming the chives, he said. But in order to make money faster, the chives are generally sold right after the insecticides have been applied.

Mr. Huang from Gengzhuang Village said that local farmers don’t care about “green” products; they have all become rich by selling garlic chives and are living in big houses.

“They don’t eat the contaminated chives themselves,” Huang said. “Don’t they know they hurt consumers?” he asked.