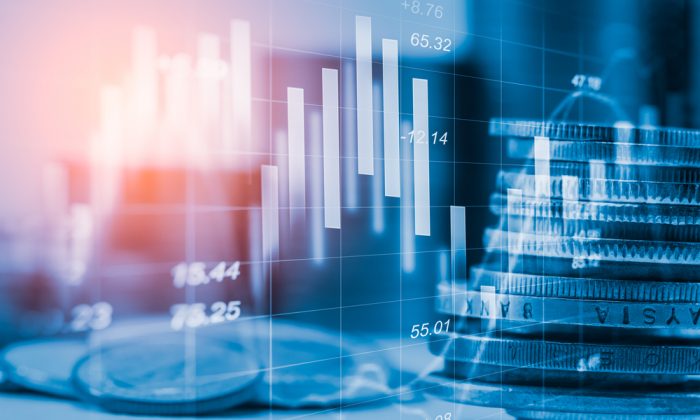 Banks Rolling Over May Be a Bad Omen for This Market: Taking Stock

Stock futures are looking a bit delicate currently, with the e-minis down more than 10 handles and at one point coming close to testing June 25 lows. Weakness in the global markets begets weakness in the U.S., with the persistent tumbling of Chinese stocks (H Shares joined Shanghai in a bear market recently) and the breakdown in European banks (Deutsche Bank sank almost 5 percent to a record low) continuing to put a hurt on sentiment.

Uncertainty on trade and the mixed messages from the White House remains the number one concern for the markets—Lighthizer made some strong comments recently on “unjustified tariffs” by WTO members and the saga over ZTE Corp. continues to drag on—while a stunning upset in the New York primaries that shined light on the ongoing struggle over the Democratic party’s identity (and how this might look for a real challenge to Trump in 2020) is also grabbing a lot of attention today.

Ugly Action in the Banks

The action on June 26 was a pretty clear reversal from the previous day, where tech bounced back from its brutal start to the week and defensive groups (most notably, the consumer staples) turned into laggards. That all makes fine sense as there wasn’t any huge trade-related bombshell that rocked the markets like we saw on June 25.

But one sector stood out like a sore thumb right from the get-go, and that’s the financials (S5FINL currently on a record twelve-day losing streak), more specifically the selling in the banks off the open that barely subsided as the day wore on. Some of these charts are just downright ugly, like JPMorgan and Bank of America both breaking their 200-day moving average last week and Goldman nearing 52-week lows (and pretty major support at the $220 per share mark).

How this tape can hold up if the banks continue to roll over is anyone’s guess, but the quickfire sentiment shift from 10-year yields to the moon (or at least well above 3 percent at this point) to major concerns about a flattening yield curve (see this QuickTake for why you should care) is something that could linger for some time.

The next catalyst is just two trading sessions away, and that would be the second round of stress test results (or CCAR). And while all 35 banks passed last week, it isn’t all sunshine and puppy dogs for this next event, some experts predict Wells Fargo and Deutsche Bank’s regulatory issues may signal qualitative risk while Goldman, Morgan Stanley and State Street may need to slash their shareholder-return ambitions.

Plus we’re just a little more than two weeks away from the kickoff to bank earnings season. Last quarter was filled with awful-slash-questionable price action, where traders immediately sold into strength on virtually every major bank’s results.

Homebuilders: Could Lennar’s blowout beat, where new home orders popped 62 percent year-over-year, be an inflection point for a group that has done nothing but trend lower since the January peak? Maybe KB Homes will have an answer for us on June 28 Rental Cars: Hertz and Avis remain on shaky ground as all it took to sideswipe both stocks by 12 percent and 9.7 percent, respectively (plus the bonds, as both companies were the worst performers in the high-yield market), was a Morgan Stanley note that warned on industry fundamentals and financial leverage; welp, watch out for further pressure as Goldman cut estimates for both names last night after a survey of airport rental car rates suggests “peak season pricing may be at risk of being softer” year-over-year.

Bed Bath & Beyond’s earnings were already in focus—options imply a circa 12 percent move on a heavily-shorted retailer who has been absent for much of the “end of retail apocalypse” trade—but things got a little more interesting yesterday after one of the stock’s bears, Wolfe’s Adrienne Yih, called for a potential upside surprise to gross margins after doing some promo checks.

Staying in the consumer space, Chipotle’s turnaround is in full force, much to Bill Ackman’s elation (assuming Pershing is still the top holder with at least a 10 percent stake), but could today’s “special investor call” be a sell-the-news event with the stock already rallying 60 percent year-to-date?

A slew of auto suppliers relief rallied on June 26 for the first time since Trump threatened to impose a 20 percent import tariff on European cars. Lear was one of them, gaining 1.7 percent ahead of today’s investor day—this is a company that had ~12 percent of revenues tied to China and more than 10 percent levered to Europe in 2017, so you have to think trade impact will be a topic that investors will want to hear about, especially after what we’ve seen lately from Daimler and Harley-Davidson.

Notes From the Sell Side

Goldman is incrementally negative on INTC, which is already reeling from the recent CEO resignation and two downgrades this week ( Nomura Instinet and Bernstein) and AMD after a trip to Asia; on the flip side, analyst Toshiya Hari is now more positive on ON and MU.

Morgan Stanley is no longer cautious on telecom services, upgrading the sector to an inline view (and resuming AT&T with an overweight rating) on valuations and a more balanced competitive and regulatory outlook.

Bernstein says bank stock valuations are looking more attractive and upgrades STI and MTB to outperform: “The regional banks look like the big excess capital stories today, with CFG (18% of market cap), ZION (17% of market cap), and CMA (14% of market cap) at the high-end of the group.”

Wolfe Research’s Nigel Coe, formerly with Morgan Stanley, has rolled out coverage on the industrials sector (“we lean more towards the ’art of the deal’ scenario in that trade tensions will simmer down.”)

And GE gets an upgrade from Oppenheimer after yesterday’s 7.8% breakup-fueled rip, YUM is raised to a buy at BTIG on GrubHub partnership benefits, and MRVL gets a couple bullish notes with an upgrade from Deutsche Bank and an outperform initiation at Evercore ISI.