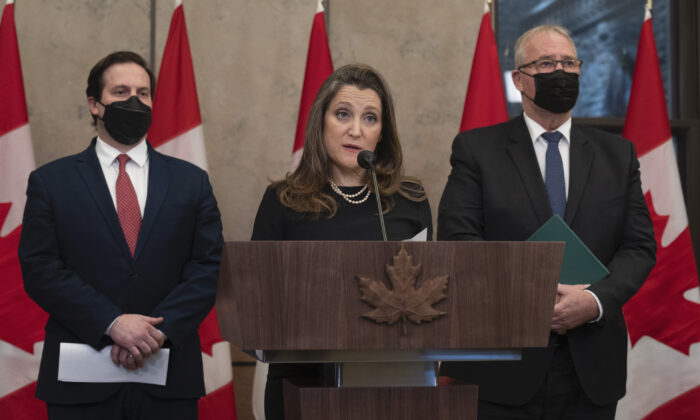 The RCMP have started sharing names of individuals and corporations, as well as their cryptocurrency wallets, with financial institutions to freeze the accounts of some people involved with convoy blockades and protests, federal ministers say.

Deputy Prime Minister Chrystia Freeland told reporters in a press conference on Feb. 17 that information is now being shared by law enforcement with Canada’s financial institutions to cut off funding for the ongoing protests that oppose the federal government’s COVID-19 mandates.

“The names of both individuals and entities, as well as crypto-wallets have been shared by the RCMP with financial institutions, and accounts have been frozen, and more accounts will be frozen. Crowdfunding platforms and payment service providers have started the registration process with FINTRAC,” Freeland said.

The announcement comes after Prime Minister Justin Trudeau invoked the Emergencies Act on Feb. 14, which gives authorities sweeping additional powers to respond to the protesters. The majority of provincial premiers have opposed the move, saying the unprecedented measure is unnecessary.

“The measures we enacted include broadening the scope of Canadian rules to fight money laundering and terrorism financing so that it includes social financing platforms and various financial transaction institutions, it will also enable them to report suspicious and other activities to FINTRAC and it will help put an end to this,” Freeland said.

“It will require that financial institutions reassess their links with all persons involved in blockades and inform our national security organizations.”

She said the emergency order will also allow federal, provincial, and territorial governments to communicate information to banks and financial service providers, which will “enable them to put an end to funding and financing to unlawful blockades.”

Freeland refused to release the specific numbers on how many accounts, either personal or corporate, have been targeted, saying that she doesn’t want to jeopardize the “operational actions [that] are being taken.”

Public Safety Minister Marco Mendicino also said at the press conference that on Feb. 16 he had officially tabled a motion to confirm the federal government’s emergency declaration made under the Emergencies Act, and he expects to debate the motion with MPs “over the next few days.”

The protests in Ottawa and across Canada started with truckers who opposed the federal government’s COVID-19 vaccination requirements for drivers crossing the Canada-U.S. border. Starting on Jan. 29, large convoys of trucks drove to the capital to protest the measure, while supporters opposing pandemic-related mandates and restrictions joined in.

Many protesters have said they will remain in the nation’s capital until the mandates are lifted.