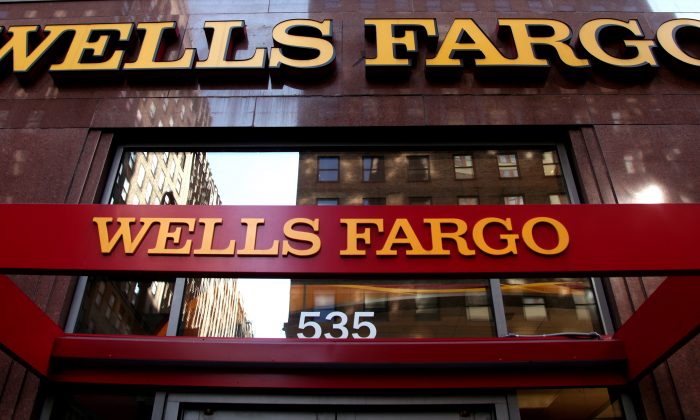 A Wells Fargo sign is displayed at a branch in New York. Wells Fargo is in the spotlight after its employees allegedly created up to 2 million bank and credit card accounts, transferred customers' money without telling them and even created fake email addresses to sign people up for online banking in an effort to meet lofty sales goals. When Wells Fargo CEO John Stumpf testifies before a Senate committee hearing Tuesday, Sept. 20, 2016, it won't be just his bank under fire for turning friendly branches into high-pressure sales centers. It'll be the entire industry. (AP Photo/CX Matiash, File)
Business

Banks Focus More on New Accounts and the Fees They Bring

Wells Fargo is in the spotlight now after its employees allegedly opened up to 2 million bank and credit card accounts, transferred customers’ money without telling them and even created fake email addresses to sign people up for online banking in an effort to meet lofty sales goals.

But cross-selling, as it is called, is the lifeblood of the entire retail banking industry. Other banks don’t face allegations of fraud, like Wells Fargo is, but experts say the industry as a whole engages in high-pressure sales tactics. Once customers open a basic savings or checking account, banks give them the hard sell to sign up for even more, whether that’s a credit card or a mortgage or a retirement account.

Surveys done last year by consulting firm cg42 showed that roughly 40 percent of Wells Fargo customers asked said their No. 1 complaint was employees’ constant pushing of products the customers did not need or want. But customers at other banks made similar complaints. Of Bank of America customers, 31 percent said they felt overly pressured for products they didn’t want or need. At both Chase and Citigroup, that figure was 27 percent.

“Bank of America, Citi, Chase were all envious of Wells’ ability to cross-sell as well as they did,” said Steve Beck, a managing partner with cg42.

While customers complained of overly aggressive sales tactics, none of the other banks have been accused of wrongdoing except Wells.

The change in focus for retail banks had been taking place slowly for years, but the financial crisis that began in 2007 and the impact on banks fueled faster change. The Federal Reserve’s cutting interest rates to nearly zero gave the economy a boost during the Great Recession, but it also eviscerated the banks’ ability to earn interest income, spurring them to seek out new forms of revenue—often in the form of fees.

And the more products a customer has, the more potential there is for a bank to earn fees. Those could be the overdraft fees at a checking account or management fees of a retiree’s nest egg. Another benefit for the industry is that having several products with a bank makes it more difficult for customers to leave and switch to a new one, said Bob Hedges, a banking industry consultant with A.T. Kearney.

To adapt to their new business model, banks have been physically transforming their branches. Chase, Citi, BofA and Wells have all opened smaller branches with few, if any, teller windows for routine transactions like depositing checks or account inquiries that are more often handled at ATMs or on the Internet. Instead, there’s more square footage for personal bankers to assist customers with their needs—or possibly sell them additional products. Wells makes a point of calling its locations “stores” instead of branches.

“Cross-selling is hard, difficult work, but ultimately it’s about keeping customers banking with you,” Hedges said. “But you also risk alienating your customers when you cross-sell too hard.”

Wells Fargo, familiar to customers for its stagecoach logo, had also long been known in the banking industry for its aggressive sales goals. The average Wells Fargo household had on average more than six products with the bank, a metric Wells top executives would highlight every quarter with investors. The bank even had a “Gr-Eight” program aiming to raise that number to eight. Wells never reached that level.

Wells’ definition of a “product” covers many types of services, Hedges said. Online banking, a savings account and a checking account could all be considered separate products at Wells. Customers at other banks usually have no more than three products, said Hedges.

Wells Fargo’s CEO has said the bad behavior was isolated to only a handful of employees and managers, even though Wells acknowledged that it had fired more than 5,000 employees for misconduct. After being fined last week, Wells pledged to end the sales goals program by the end of the year.

Ruth Landaverde, a former worker at both Wells Fargo and Bank of America, said the pressure was intense at Wells and at BofA.

She worked for Wells Fargo from 2009 to 2010 at a division that sold additional products like credit cards to already existing customers. Stress got so high that Landaverde said she developed a tic in her eye and sleep problems.

Landaverde said she had to sell four credit cards and four auto loans each week, as well as three home mortgages or refinance submissions. She said the quotas were simply to keep her job, not to earn any substantial commission or bonus.

“I wasn’t going to do something unethical, but the sales pressure was very real,” she said. “I can see why some employees did what they did.”