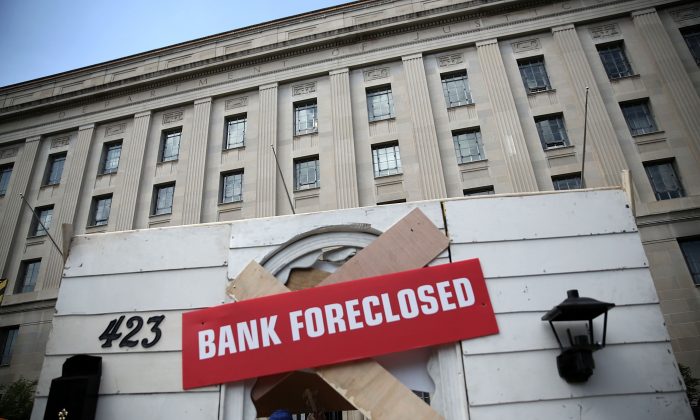 Banks Cooking Up Another Financial Crisis

Wall Street is cooking up another crisis—making shoddy loans and selling worthless securities to investors hungry for higher yields than CDs and government bonds offer.

Dodd-Frank banking reforms imposed very costly regulations on mortgage and commercial lending. Regional banks, which have solid knowledge of smaller businesses, could not bear these costs and sold out to large Wall Street institutions. Now a handful of money center banks control more than half the deposits and lendable money.

Although big banks have branches everywhere and are flush with funds, they don’t know much about which businesses are likely to repay what they borrow.

Banks aren’t carrying many mortgages on their books—they are merely conduits for Fannie Mae—but business loans have recovered to pre-financial crisis levels. And the bank examiners at the Office of the Comptroller of the Currency, the FDIC, and Federal Reserve are alarmed about their lending standards.

Too often loans are made to businesses with inadequate cash flow—paper profits are important to stock investors but banks focus on cash flow to evaluate whether an enterprise can pay up each month. Also, many loans carry weak covenants and collateral.

Banks are lending at today’s low interest rates with alarmingly long maturities. That is troublesome because banks’ cost of funds go up and down as the Federal Reserve tightens and loosens monetary policy.

Many economists expect GDP growth to pick up the latter half of this year and next, and for the Federal Reserve to start pushing up interest rates. Then banks will lose money—lots of it—on 5- and 10-year loans made today. If the economy doesn’t pick up—economists have been known to be wrong—then loans made on questionable cash flow and weak collateral will fail.

Either way, banks are at the casino again!

Related Discussion: Are the Fed’s attempts to boost the economy making things better?

But alas banks are shunting off a lot of their risky bets onto witless investors—thanks to the new boom in derivatives trading. Remember those nifty bonus generating contraptions that made 28-year-old MBAs millionaires and wrecked AIG and Citigroup.

When the losses on shaky bonds and loans come, big banks, bless their generosity, will spread the headaches around. Wrecked personal finances and broken dreams will follow, and consumer spending will slow, taking the economic recovery into the drink.

Not to be out done by their predecessors, today’s modern bankers are also writing lots of “synthetic securities.” Those generate returns to investors, not from the cash flow on loan repayments, but rather from bets made by third parties about whether loans will succeed or fail. Those have as much place in sound banking as nepotism does in government employment.

As in pre-crisis days, the total value of derivatives outstanding is many multiples of the actual value of the U.S. economy. When the loans and derivatives fail, many who have made promises to pay up won’t have the cash—just like 2008.

Look for bank balance sheets to be rocked, lots of wealthy folks to file for bankruptcy, and the economy to suffer another migraine.

Depressing? They don’t call economics the dismal science for nothing.

Peter Morici is an economist and professor at the Smith School of Business, University of Maryland, and widely published columnist.