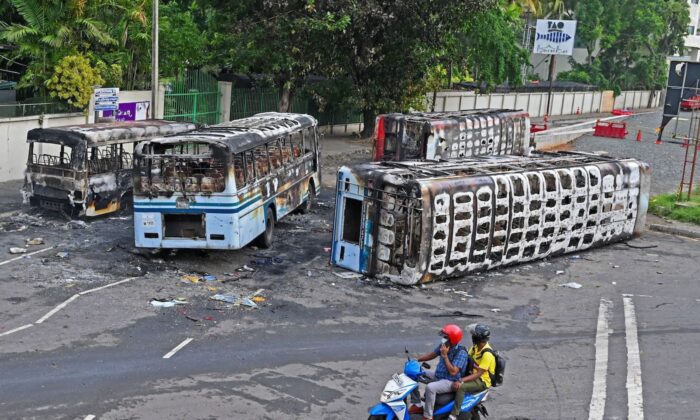 Men on a scooter ride past the burnt buses near Sri Lanka's former prime minister Mahinda Rajapaksa's official residence 'Temple Trees', a day after they were torched by protesters in Colombo on May 10, 2022. (Ishara S. Kodikara/AFP via Getty Images)
Asia & Pacific

Bankrupt Sri Lanka’s Misery Should Be ‘Warning’ to the World: UN

Sri Lanka’s misery should serve as a warning to the rest of the world in dealing with the global food and fuel crisis, the United Nations said on July 7.

The cash-strapped country declared bankruptcy on Tuesday after months of severe fuel and food crisis. Sri Lanka has run out of gasoline, while millions of its people are in need of life-saving aid.

The U.N. Development Programme (UNDP) said that other countries already burdened by the economic fallout of COVID-19 could face a similar situation as Sri Lanka, as the Russia–Ukraine war continues.

This is unless the international community agrees to take radical financial measures to help debt-ridden countries, the UNDP said in a statement.

“We’re witnessing a tragic series of events that are unfolding in Sri Lanka right now that should be a warning to anyone who thinks that it is up to countries themselves to figure out how to deal with this crisis,” said Achim Steiner, the UNDP’s administrator.

Many countries experienced 36 continuous months of shock, beginning with the COVID-19 pandemic and the Russia–Ukraine war, which affected global food and energy supply.

The U.N. Food and Agriculture Organization said the number of people affected by hunger globally rose from 46 million in 2020 to 828 million last year.

“Official estimates are about 125 million people falling into poverty over about 18 months … what we found right now is that three months of inflation have drawn about 71 million people into poverty,” UNDP senior economist George Gray Molina said at a U.N. press briefing.

Sri Lanka defaulted on its debt for the first time in May. The country has sought bailout packages from the International Monetary Fund (IMF) and loan packages from its major lending partners, including Japan, China, and India.

Prime Minister Ranil Wickremesinghe declared Sri Lanka bankrupt on July 5. He said the government will need to finalize and submit its debt restructuring and sustainability plan to the IMF by August.

“We are now participating in the negotiations as a bankrupt country. Therefore, we have to face a more difficult and complicated situation than in previous negotiations,” Wickremesinghe told parliament.

“Once a staff-level agreement is reached, this will be submitted to the IMF Board of Directors for approval. But due to the state of bankruptcy our country is in, we have to submit a plan on our debt sustainability to them separately.”

The maturity period for Beijing’s loan at 18 years is also shorter than for Japan’s loan of 34 years.

Christian Skoog, the UNICEF representative in Sri Lanka, said the current crisis is “stretching families to their limits” and that two in five infants in Sri Lanka weren’t fed the minimum appropriate diet.

“25 essential medicines for children and pregnant women—including for use in intensive care unit, surgeries, and treatment of life-threatening disease—are expected to run out in the next two months [and] this list is only growing. It’s a race against time,” he wrote on Twitter.

Sri Lanka already had the second-highest child malnutrition rate in South Asia before the economic crisis. The country’s food inflation stood at 57.4 percent in May, with widespread food and fuel shortages, as well as daily power cuts.