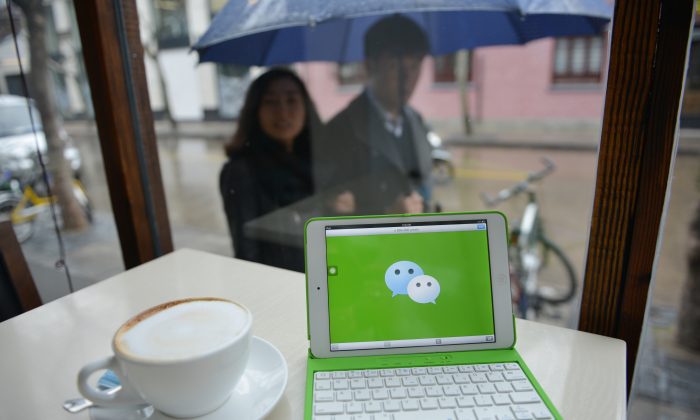 WeChat is seen on a mobile device in a coffee shop in China in this file photo. (Peter Parks/AFP/Getty Images)
China

For most people of the Internet generation in China, conversations with friends involve pinging them via WeChat, the messaging platform by Tencent Holdings.

Need to pay for a latte at the coffee shop? It’s as easy as firing up WeChat Payments on the smartphone, and it’s done.

And when it’s time to apply for a loan for your small business idea, naturally, there’s a Tencent app for that.

The service is called WeBank. Approved by regulators in early 2015, it was the first online-only bank approved by Chinese regulators.

In 2015, online banking has become the new battleground for Chinese Internet giants.

Beijing is approving online-only private banks in an effort to diversify the banking industry and spur business growth. In the past, Chinese banks were all state-owned. They primarily catered to larger, state-owned enterprises (SOEs) or governments. Small, privately owned companies and individuals with limited collateral have long struggled to obtain credit from large banks.

Economists say that small and medium-sized businesses generate three out of every four new jobs in China. With SOEs contracting or consolidating, Beijing desperately needs private and smaller businesses to help deliver on its economic and jobs growth targets.

Online-banking platforms are uniquely equipped to offer loans to consumers and smaller businesses.

Online banks affiliated with the “Big Three” Internet giants Baidu, Alibaba, and Tencent hope to mine the troves of behavioral, geographical, and financial data they already collect from existing services to screen borrowers for credit worthiness.

With social platforms, online stores, and Web portals catering to hundreds of millions of existing daily users, online banks affiliated with these Internet giants have access to marketing and advertising platforms that few brick-and-mortar banks could hope for.

In November, Baidu and Citic Bank announced plans to set up a joint venture bank to offer loan and investment products online. As of early December, the application has not yet been approved by regulators.

Tencent is the largest shareholder in WeBank at 30 percent. Other major shareholders in WeBank include Shenzhen Baiyeyuan Investment and Shenzhen Liye, each with a 20 percent stake, according to data from Bloomberg.

These online banks offer consumers financial services products such as money market funds, investment products, and loans. Without storefronts and overhead, online-only banks compete by having a lower cost base to brick-and-mortar banks.

“At a traditional bank, business has to go through several departments, resulting in additional costs,” Zheng Xinlin, a WeBank vice president, told Caixin Media. “Ours is a low-cost, one-stop service.”

As of September, WeBank had underwritten more than 1 billion yuan ($156 million) worth of consumer loans, 40 percent of which were for employees of Tencent, according to sources who spoke to Caixin.

While Internet firms believe online banks can provide much-needed capital for consumers and small businesses, regulators could be dampening those hopes.

Beijing has moved to rein in the lightly regulated market of online payments—an area that can affect the ability to transfer money into and out of online banks.

Draft rules issued in August by the People’s Bank of China put restrictions on online payment services such as Alipay and WeChat Payments. New guidelines would limit fund transfers, cap the amount of total daily transactions, and increase the requirements to provide identification when opening accounts.

The last rule would require applicants to give documentation such as educational background, tax bureaus, and bank accounts in order to open online accounts offering more than the most basic services.

Some critics warn that these regulations could stifle development in one of the most innovative corners of the Internet.

Outside of government hurdles, competitive pressures have kept Internet-only banks from fully taking off.

WeBank’s first year in operation has been a rocky one. Under current Chinese banking rules, customers must physically provide identification at a real bank branch in order to make deposits. At launch, WeBank partnered with China Merchants Bank, the nation’s sixth-largest lender, to accept bank applications.

But in September, China Merchants Bank ended its relationship with WeBank and has refused to let its customers link accounts to WeBank’s online platform. Some of China’s biggest state banks have also declined to partner with WeBank, according to Caixin sources. Later in the month WeBank’s president, Cao Tong, resigned after only 10 months on the job.

WeBank and MYbank hope facial-recognition technology will allow the firms to remotely verify identities without the need to visit a physical bank branch. But so far, regulators have not approved such technologies.