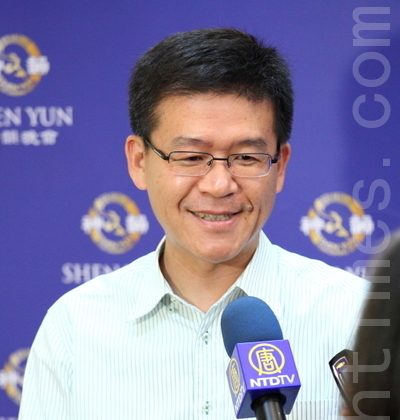 TAICHUNG, Taiwan—Shen Yun Performing Arts New York Company carried on its fourth run at JhungShan Auditorium on the evening of March 30. In the auditorium, Shen Yun led the audience back to the origin of the Chinese nation–the authentic Chinese culture.

Among the politicians and other celebrities who came to see Shen Yun was Mr. Wang Ming-Ren, vice president of UBS (Union Bank of Switzerland). This was the first time he had seen Shen Yun. He said, “Shen Yun presents the essence of Chinese culture, and it is a super class performance. It is really outstanding! “

He marveled that the overall program was of tremendous value for all to see, commenting on many aspects.
He said, “from the performance, I can see that they put a great deal of effort in the holistic training and rehearsal.

“As for the costumes, I think that they have showcased the exquisiteness of traditional Chinese costumes.

“Their dancing skills are also superb!

“The overall performance is very harmonious and outstanding.

“In addition to traditional dances, it also combines historical legends and folk dances. To sum up, it is the essence of Chinese culture, so I think it is incredible!”

Mr. Wang said that he gave Shen Yun full credit for putting effort and devotion in promoting traditional Chinese culture. He then explained, “I find it spectacular that the traditional culture that we can hardly see due to the impact of Western culture can be presented again. I think it is really great.”

In the course of appreciating the performance, he noted that there were many resonances for spiritual sensation. “Some paragraphs of the lyrics of the songs sung by the tenor and the soprano are very expressive. Especially those of “What Is the Meaning of Life” deeply touched my heart.”

Finally, he sincerely expressed, “The performances of the Shen Yun Performing Arts are indeed high class. I think it is really worthwhile to see it.”