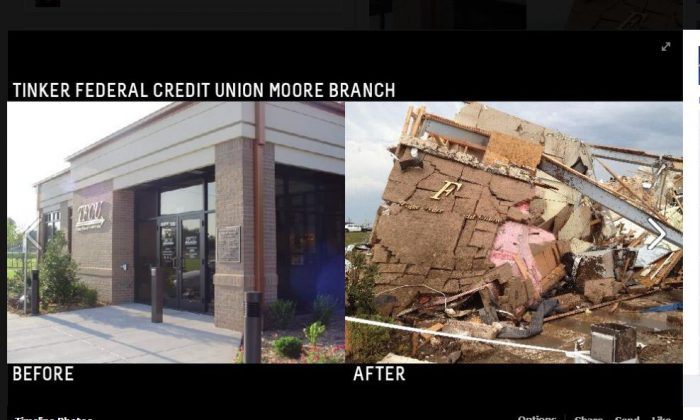 Bank vault saves 24 lives: A bank vault was credited with saving the lives of 24 people during a F-5 tornado in Moore, Okla., earlier this week, it was reported.

The Tinker Federal Credit Union posted a photo of the still-standing vault, with a “before” and “after” shot of the bank.

“This is the vault where 14 TFCU employees and eight members rode out yesterday’s tornado in Moore and emerged safely afterward,” the Facebook caption reads, according to MyFox8.com.

“I was one of the members in the vault yesterday,” Dena Clark wrote on the Facebook page. “You all should be so proud of your employees! Everyone, especially Jan the branch manager, acted so heroically to keep everyone safe. I am so thankful! Our family loves TFCU!”

Matt Stratton, vice president of marketing for TFCU said that he is unsure if the bank was directly in the tornado’s path

However, he said that “it essentially destroyed the branch and a lot of things around it,” according to CUTimes.com