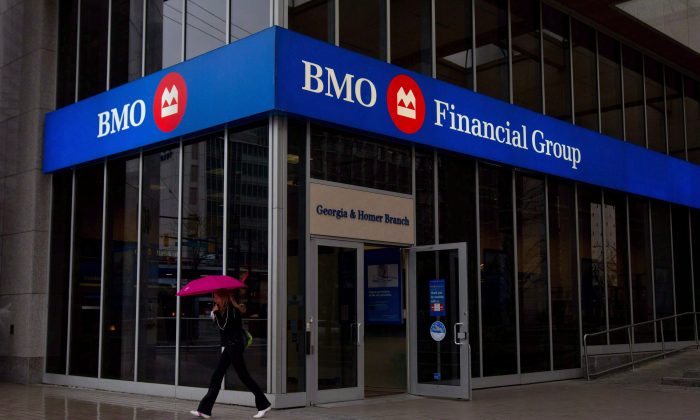 A woman leaves a Bank of Montreal branch in downtown Vancouver, B.C., on March 22, 2011. BMO Financial Group has added its voice to a chorus of Canadian banks that say they must control expenses during the current period of sluggish consumer lending. (THE CANADIAN PRESS/Darryl Dyck)
Canada

BMO Financial Group has added its voice to a chorus of Canadian banks that say controlling costs will be essential to help them weather a period of sluggish consumer lending.

The outlook came as the group that owns Bank of Montreal (TSX:BMO) reported second-quarter net income of $975 million on Wednesday, down five percent from a year earlier.

“Our approach is deliberate,” BMO chief executive Bill Downe told investors. “We’re making fundamental changes to the business that will reap benefits over time, including simplification of the organization, moving senior executives closer to the customer … and reducing repetitive tasks.”

Downe also said the bank is trying to strengthen its brand south of the border in order to capitalize on signs of strength in the U.S. economy.

His comments echoed those made last week by TD Bank (TSX:TD) chief executive Ed Clark, who said he was looking to trim expenses but felt heartened by improving economic conditions in the U.S., such as shrinking unemployment and higher home values.

However, Clark also said the competitiveness of the U.S. market, where the big American banks are looking to regain lost market share post-recession, was putting pressure on TD’s profit margins.

Scotiabank (TSX:BNS), Canada’s most international bank, also said it expects growth in the U.S. economy to favourably impact its operations, as it reported adjusted earnings two cents below analyst estimates on Tuesday.

After adjustments, the bank said its income was $997 million, up two percent compared to the same 2012 period. That equalled $1.46 per share—three cents short of analyst estimates.

The bank also took a restructuring charge of $82 million in the quarter as it worked to improve productivity.

“The restructuring charge this quarter is part of an active, ongoing commitment to align non-interest expense with the current and future business environment,” said Downe.

On the positive side, Downe said slowing growth in Canadian consumer lending seems to have plateaued.

“We have an advantaged business mix, diversified both by geography and consumer segment,” said Downe.

“We’re well positioned, given our U.S. businesses, and expect to see continued benefits from our strength in commercial banking, capital markets and wealth, important areas for growth in the current environment.’”

With interest rates at all-time lows, the Canadian housing market cooling, and debt-strapped Canadians becoming reluctant to borrow more, the banks have been turning more to wealth management and capital markets to increase profits.

BMO’s personal and commercial banking operations in Canada were down a slight $3 million from the same year-earlier period, contributing $430 million to total net income.

Net income from BMO’s private client group was also down marginally, dipping $6 million to $141 million, but the greatest year-to-year decline was in corporate services, which had a strong profit last year due to unusual circumstances.

In the quarter ended April 30, corporate services recorded a $26 million net loss, compared with net income of $73 million in the second quarter of 2012. On an adjusted basis, the year-earlier net income would have been $3 million.

And BMO Capital Markets saw a big increase from a year earlier, rising $42 million or 18 percent to $275 million.