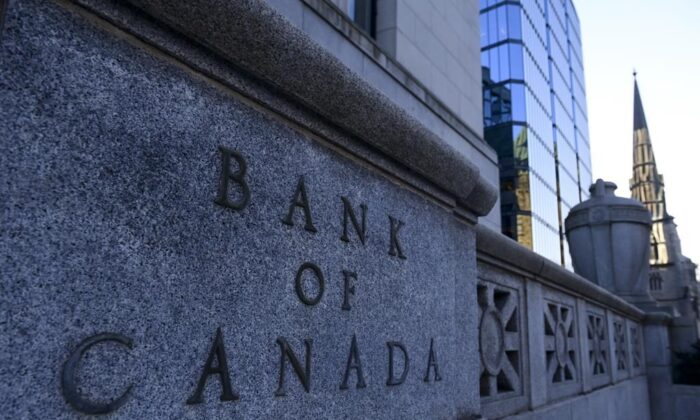 The Bank of Canada in Ottawa on Tuesday, Dec. 15, 2020. (The Canadian Press/Sean Kilpatrick)
Canada

OTTAWA—Canada’s central bank has sent a warning that increases in the cost of living would continue into next year, but signalled it wasn’t yet prepared to pull its key lever to rein in inflation.

The annual pace of inflation in October rose to 4.7 percent, a pandemic-era high and the fastest year-over-year gain in the consumer price index in 18 years.

The Bank of Canada said high inflation rates will continue through the first half of next year, but should by the second half of 2022 fall back to its comfort zone of between one and three percent.

By the end of next year, the bank is forecasting the annual inflation rate to fall to 2.1 percent.

While the path for inflation and the economy are largely following the central bank’s expectations, the statement released Wednesday said the bank “is closely watching inflation expectations and labour costs” to make sure they don’t take off and cause a spiral of price growth.

The comments in the last scheduled rate announcement of the year left the key rate at its rock-bottom level of 0.25 percent, unchanged from where it was in January at the onset of the COVID-19 pandemic.

The announcement also said that the bank doesn’t expect to raise the trendsetting rate until some time between April and September next year, which is unchanged from its previous guidance.

“Overall, the (Bank of Canada) did indeed resist spitting in anyone’s holiday ‘nog,” Derek Holt, head of capital markets economics at Scotiabank, wrote in a note. “They stayed on track with guidance to begin entertaining rate hikes as soon as next April.”

When the bank moves, it is likely to move fast and furious, said BMO chief economist Douglas Porter. The bank has a history of quickly raising rates from emergency levels, he said, suggesting four rate hikes by the end of 2022.

“When the Bank of Canada believes that interest rates need to go up, they don’t tend to wait around, they tend to move relatively quickly,” Porter said.

The bank said the economy appears to have “considerable momentum” heading to the end of the year after growing at an annualized rate of 5.4 percent in the third quarter of the year, a hair below what the Bank of Canada forecasted in October.

The Bank of Canada’s statement noted that the quarterly growth brought total economic activity to within about 1.5 percent of where it was in the last quarter of 2019, before COVID-19 washed upon Canada’s shores.

Similarly, the labour market had a stronger-than-expected showing in November, pushing the share of core-age workers with a job to an all-time high and leaving the unemployment rate 0.3 percentage points above its pre-pandemic level in February 2020.

Still, the bank notes headwinds from devastating floods in British Columbia and uncertainties from the Omicron variant that could throw another wrench into snarled supply chains, and scare off consumers from spending on services.

TD senior economist Sri Thanabalasingam said the bank may move sooner on rates if Omicron proves to be less of a health concern than initially feared, noting the economy can handle it “with inflation running hot, and the labour market on solid footing.”

A rise in rates would impact interest charged for variable rate mortgages, which could tighten the finances of households that over the course of 2021 have added $121.5 billion in mortgage debt, including $38 billion between July and September.

“It’s going to be, I think, particularly problematic for Canadians who have gone into fairly substantial mortgages, particularly when interest rates have been low for such a long period of time,” said Tashia Batstone, president of FP Canada, a financial-planning association.

“What that means is you have to work harder to stick to your budget, you have to be watching the debt that you’re taking on, and in particular watch that you may not be able to have the flexibility around mortgage loans.”