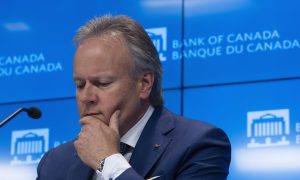 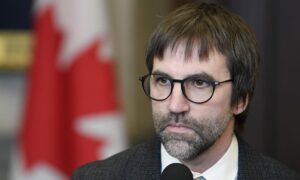 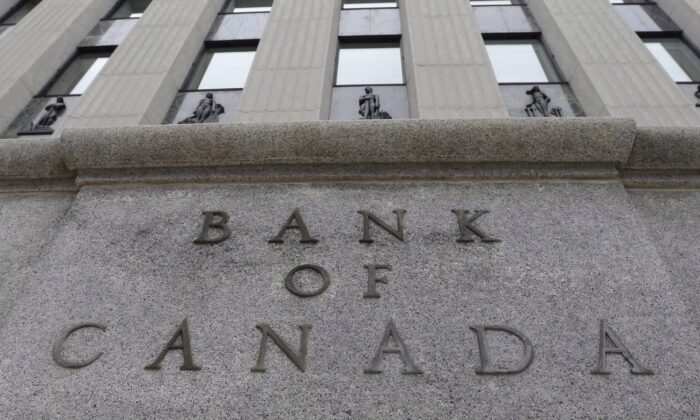 The Bank of Canada. (The Canadian Press/Adrian Wyld)
Canada

OTTAWA—Canada’s central bank made yet another unscheduled rate cut Friday to bring its key interest target down to a crisis-level low, and the federal government upped its financial lifeline to businesses in a two-pronged effort to further combat the economic shock from COVID-19.

It was the double shock from the CCP virus, also known as the novel coronavirus, and a sharp drop in oil prices that spurred the Bank of Canada’s surprise announcement—its second unscheduled cut this month and third overall this month—to lower its rate by half a percentage point to 0.25 per cent after it started the month at 1.75 per cent.

The interest rate cut takes the key rate to what the central bank referred to as “its effective lower bound” or the lowest level that rates can be set, although they alone may not spur economic activity because workers are being asked to stay home.

Governor Stephen Poloz said there are still tools left in the central bank’s kit, but it was trying to do everything it can right now to deal with deep economic shock.

“A firefighter has never been criticized for using too much water,” Poloz said.

“We want to make sure that we’ve got a great market function and indeed that the economy has a great foundation for growth when activity resumes.”

Economists had expected the Bank of Canada to cut rates at its next scheduled announcement in the middle of April, but it needed to react to the extent of the economic damage to date to bring rates to “crisis-level lows,” said Benjamin Reitzes, director of Canadian rates at BMO.

Brett House, Scotiabank’s deputy chief economist, said the only reason the bank didn’t move sooner was because the previous cut hadn’t trickled its way through the system and brought borrowing costs down.

What helped was a series of financing programs over the last week, he said, including two new ones that could be described as quantitative easing.

One of the new programs announced Friday will aim to alleviate strains in short-term funding markets, while the other will see the central bank begin acquiring federal government securities in the secondary market with a minimum of $5 billion per week.

Not long after Poloz spoke, the federal government announced it was upping its proposed wage subsidy for businesses to 75 per cent. A broad swath of business and labour groups had criticized the original proposal of a 10 per cent subsidy for falling well short of what was needed to avoid mass layoffs.

The United Steelworkers welcomed the change, but noted the subsidy needed to be available to all employers and workers who need it. The Canadian Federation of Independent Business said that backdating the subsidy to March 15 will allow some small businesses that have had to lay off staff rehire them quickly.

As one example, the wage subsidy may let financial technology startup Borrowell Inc. keep all 80 of its employees, said chief executive Andrew Graham.

Canadians will get a better picture of the employment situation early next month when Statistics Canada releases its monthly labour force survey. Chief statistician Anil Arora issued a plea Friday for more companies to respond in multiple cities, including Toronto and Vancouver, to help get “the most accurate account of the situation.”

The Liberals said they are also working with banks to provide loans of up to $40,000 for small businesses. They will be interest-free for the first year and up to $10,000 could be waived for repayment if the loan is paid off by Dec. 31, 2022.

Speaking outside his Ottawa residence, Prime Minister Justin Trudeau said the government needs to hammer out the details of the proposal, which he hoped to provide by Monday.

Asked about paying for the measures, the prime minister said the government would provide a full costing to Parliament of what he called “unprecedented investments in the economy,” but didn’t say when details would be public. He added that the spending was necessary to “get through these coming months of restricted economic activity.”

During an afternoon press conference alongside Poloz, Finance Minister Bill Morneau said the government hasn’t put a cap on what it might need to spend to bridge the economic storm.

“We’re going to do whatever it takes to support Canadians,” Morneau said.

“We’re always going to responsibly look at what these programs cost, but that is not the key issue right now. We’ve got literally millions of people who are worried about whether they’re going to have the money to support their families in the coming weeks.”

Parliament’s budget watchdog said in a report Friday that the government has fiscal room to spend more, particularly with rates as low as they are.

The report from budget officer Yves Giroux, which paints one possible scenario for the Canadian economy from a six-month downturn, suggested the federal deficit for the coming fiscal year could be $112.7 billion—a jump of $89.5 billion from previous forecasts.

That number doesn’t include extra spending the Liberals announced this week to provide a $2,000-a-month benefit, for up to four months, to Canadians whose income dries up due to COVID-19. Nor does it include the money the Liberals will now spend on the increased wage subsidy.

An RBC report earlier this week suggested that a $200-billion deficit may not be out of the real of possibility, depending on the depth and duration of the downturn.