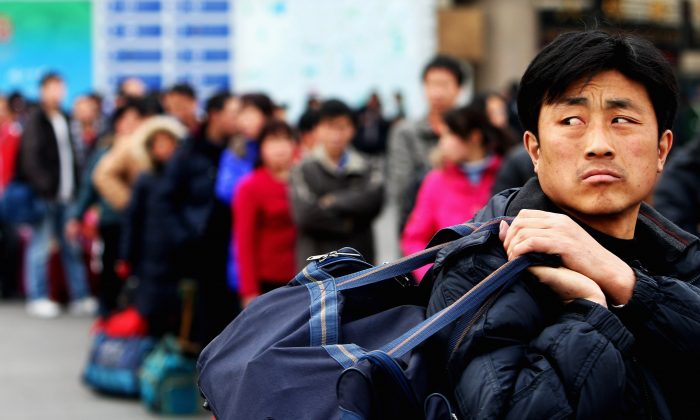 The Chinese regime still has considerable power over the markets. After a 7 percent crash of the Shanghai Composite on Jan. 4, it managed to reverse another 3 percent drop on Jan. 5.

So in the very short term, all is well. In the long term and even in 2016, Bank of America sees big problems ahead for the Chinese economy.

According to its analysts the regime has to fight multiple battles at once and will ultimately lose to market forces.

“We judge that China’s debt situation has probably passed the point of no return and it will be difficult to grow out of the problem,” states a report by Bank of America’s chief strategist David Cui.

The report points out that a spike in private sector debt almost inevitably leads to a financial crisis. China’s private debt to GDP ratio went up 75 percent between 2009 and 2014, bringing total debt to GDP to about 300 percent. Too much to sustain.

Western analysts often point out that China can handle it and that Beijing has found its own brand of state-sponsored capitalism, which can prevent a crisis from happening.

Cui shows this assumption is wrong from the start. China has already gone through all forms of debt crises (currency devaluation, hyper-inflation, and bank recapitalization) since the reform and opening up policies started in 1978.

“Banking sector NPL reached some 40 percent in the late 1990s and early 2000s and the government had to strip off some 20 percent of GDP equivalent of bad debt from the banking system between 1999 and 2005,” Cui wrote.

He also wrote that investors assumptions about how the Chinese regime runs the economy will face another severe test in 2016. The assumptions were as follows:

As of 2016, most of these assumptions are no longer true. In addition, market participants and the regime have made the debt problem worse by adhering to them.

This is “a classic case of short-term stability breeding long-term instability. It’s our assessment that the longer this practice drags on, the higher the risk of financial system instability, and the more painful the ultimate fall-out will be,” Cui wrote.

For the coming crisis, Cui believes China will probably have to devalue its currency, write off bad debts, recapitalize the banks, and reduce the debt burden with high inflation.

And even if the regime wants to continue to deliver on the five assumptions, it won’t be able to, as it sometimes contradicts itself. For example, it is impossible to keep growth from crashing by printing money without further downward pressure on the currency.

So after the events of last August and after the International Monetary Fund finally included China in its reserve currency basket, the regime completely abandoned the stable currency objective and let the yuan drift lower.

Another key point Cui doesn’t mention, but is important is reform. The regime promises reform and even follows through in some cases. But if push comes to shove, it resorts back to central planning to mold the market according to its needs, with less and less success.

“It seems to us that the government’s policy options are rapidly narrowing—one only needs to look at how difficult it has been for the government to hold up GDP growth since mid-2014. A slowdown in economic growth is typically a prelude to financial sector instability,” wrote Cui and he predicts the Shanghai Composite will drop by 27 percent in 2016.