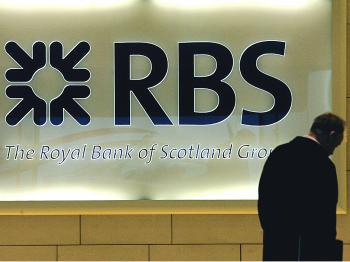 A man walks into the London headquarters of the Royal Bank of Scotland, (RBS) on January 19, 2009. (Carl De Souza/AFP/Getty Images)
Business

By Antonio Perez
biggersmaller
Print
NEW YORK—The first wave of fourth quarter earnings results from the banking industry did nothing to assuage fears that the global economic recession may indeed worsen.

We have ushered in a new year, a new president and administration, and some say, a new era in doing business. But some things never change—investors can now almost “bank on” banks losing money (unfortunately the term “to bank on” has recently lost some credibility).

Last week’s staggering losses at Bank of America Corp. and Merrill Lynch & Co. prompted the Feds to issue another $20 billion check to the nation’s largest bank. This week, European banking giant Royal Bank of Scotland (RBS) said it would report the largest loss in British corporate history—prompting a second wave of bailouts from the U.K. government.

The culprits are those same toxic assets that we’ve been dissecting for a year now—mortgage-backed securities, derivatives, and leveraged buyout loans, among other complex financial landmines.

Things have become so bad that the federal government—which earlier last year trumped the $700 Trouble Asset Relief Program (TARP) as a miracle cure—may look change course in how it assists companies.

Reports indicate that the Obama administration is looking into using the remaining $350 billion in TARP money to create a “bad bank,” which would take the toxic financial assets off the balance sheets of healthy banks—removing the tumors, if you will.

In turn this “bad bank” can be used to unwind or service these positions until they are cancelled out, matured, sold off, or otherwise turned into thin air, which would not be considered far from their intrinsic values.

RBS, one of Europe’s largest and most respected banks, is a prime example of how bad assets can sink an otherwise solid company. Like many other banks, RBS was hit hard by mortgage market’s deterioration.

In addition, at the peak of the financial boom it purchased assets of Dutch bank ABN Amro in late 2007. On Monday RBS CEO Stephen Hester told analysts that RBS would likely write off a majority of the value of ABN that it purchased more than a year ago.

Last year, the U.K. government took a majority (58 percent) stake in the bank, but its portfolio of toxic assets has virtually erased most of the government’s capital injection—another evidence that pouring more money into bad investments may not be a viable solution.

“I think the real problem with the banking industry is that no government anywhere is dealing with the ultimate cause, they’re only dealing with the effects,” Wilbur Ross, CEO of WL Ross & Co. said in an appearance on Bloomberg TV.

Ross argued that since the crisis stemmed from the mortgage markets, one possible solution is to target the root of the problem by helping homeowners pay their obligations.

“Americans have lost $5 trillion in values of their homes… that’s not a stable situation,” he stated. Ross proposed using part of the TARP money to aid homeowners, but since the average mortgage is worth more than $200,000, the amount of bailout funds currently available may not be enough.

RBS this week sold its entire ownership in Bank of China. Outside of the Chinese communist regime, RBS had been the bank’s largest outside investor. The sale generated 1.77 billion pounds ($2.43 billion) in cash for RBS.

Last week Bank of America sold portions of its stake in China Construction Bank for $2.8 billion.