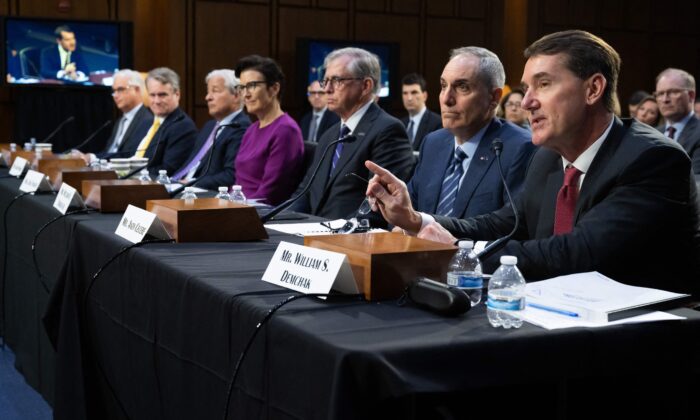 Major US bank CEOs testify during a Senate Banking, Housing, and Urban Affairs Committee Hearing on the Annual Oversight of the Nations Largest Banks on Capitol Hill in Washington on Sept. 22, 2022. (Saul Loeb/AFP via Getty Images)
Constitutional Rights

All seven bank chiefs testifying before Congress on Thursday committed to upholding the Second Amendment by promising not to restrict sales of guns following the adoption of new firearm-specific transaction codes that have sparked concern over whether the tracking data might be used by payment processors to curb sales of guns and ammunition.

The CEOs made the pledge while responding to Sen. Kevin Cramer (R-N.D.), who pressed the heads of America’s biggest retail banks for a commitment to protect and process all transactions for legal goods and services—including guns—in light of what he described as political pressure to legislate social policy through corporate boardrooms instead of through the democratic processes.

Cramer said that the adoption of the new firearm-specific Merchant Category Codes (MCC) for gun and ammunition stores was foisted on the International Organization for Standardization (ISO) by liberal activists.

Major U.S. credit card companies have announced that they would implement the firearm-specific category codes, a move that was criticized by gun rights groups and two dozen Republican attorneys general as invasive, unfair, and ineffective at bolstering public safety.

In light of the controversy surrounding the new gun-specific codes, which U.S. banks have committed to using, Cramer asked the chiefs to take a stand on protecting Americans’ Second Amendment rights.

“I want to ask each of you—as the carriers, as the acquirers, as the facilitators that are providing the capital—can you commit in front of this committee, and the pay-per-view audience that’s listening and watching, that your bank will process all transactions for the purchase of legal goods and services, and I might add constitutionally protected goods?” the Republican senator asked.

All seven bank CEOs responded in turn, each committing to processing all transactions of legal goods and services, including firearms and ammunition.

Cramer pressed Citigroup CEO Jane Fraser for “extra assurances” in this regard given the bank’s history of restricting lending to gun manufacturers.

“Citibank has in particular given me some pause. When your bank has voluntarily committed to restrict lending to firearm retail clients unless they meet your specific criteria, which in many cases exceeds the law,” Cramer said.

“I want extra assurances that law abiding gun purchasers across the country will not be discriminated against using this Merchant Category Code as a means to an end,” the senator added.

“We respect the Second Amendment. As I said, we do not intend to use the code to restrict or limit any purchases of firearm sales by our credit card customers. We do not do so today. We do believe in best practices for the sale of the retail sale of firearms and that is the policy that we’ve had for a while now,” she said.

In a separate move, Cramer led his Republican colleagues on the Senate Banking Committee in penning a letter to the Bank Policy Institute (BPI), urging the organization to resist political pressure to insert financial institutions into controversial social issues.

“The creation of the new [merchant category code] was celebrated widely by liberal Democrats and gun-control advocates. They have made it clear this is just the beginning of their campaign to block legal purchases of firearms,” the Republicans wrote in the letter (pdf).

Cramer and the other Committee Republicans called on members of BPI, which include the megabanks whose CEOs gave testimony on Thursday before the Senate Banking Committee, to demonstrate a commitment to process all transactions, including guns and ammunition.

More generally, the bank chiefs were urged by Republicans during the Senate hearing not to take liberal stances on social and cultural issues.