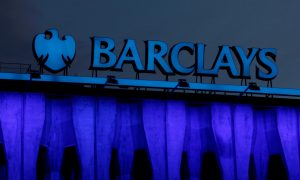 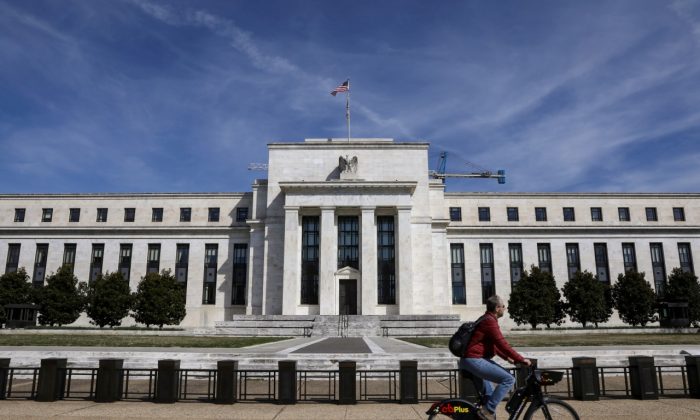 A man rides a bike in front of the Federal Reserve Board building on Constitution Avenue in Washington on March 27, 2019. (Brendan McDermid/Reuters)
Economies

Americans in rural parts of the country have been hit hard by bank closures as they lose access to services for which they struggle to find substitutes, raising their costs and contributing to their economic malaise, according to a newly released study.

Researchers at the Federal Reserve said in a new study (pdf) that, as post-crisis banking industry consolidation brings branch closures, “some consumer segments appear to have been left without sufficient, convenient, and low-cost access to the financial services they need to manage their financial lives.”

People hit the hardest by the trend—which has seen 51 percent of America’s 3,114 counties lose bank branches—are those on low incomes and lacking reliable transportation, as well as small business owners and seniors.

One of the ways people adapt to bank closures is by using online financial services. The authors note, however, that the shift to digital channels is slow for certain groups: seniors, the poor, the less educated, and those who live in rural areas.

But even people who have moved to online banking to meet some of their financial needs—mainly for basic functions like checking balances—reported that they rely on branches for deposit and withdrawal transactions and for resolving problems.

The authors found that the closing of local banks could mean loss of civic leadership and the impact of the trend “appears to involve a community-level effect that goes beyond the effects on particular individuals.”

“They invest in their communities, educate others about finances, create incentives for other businesses and signal a community’s vibrancy,” Barkin added.

The Fed also found that small business owners would likely face credit constraints due to branch closures. Most small businesses borrow from local banks and, researchers said, loan costs grow as the distance between a business and the branch of its lender increases.

Noting the importance of access to comprehensive financial services for families and businesses to thrive, the Fed called for all stakeholders to take part in dialogue “to identify potential partnerships, strategies, and policy changes that can strengthen access to financial services in these deeply affected communities.”

“Access to a robust suite of financial services is critical for families and businesses so they can successfully manage their financial lives, and build a cushion of wealth that can provide stability and support economic opportunity and mobility over the long term,” the Fed said.

Despite the benefit of local bank branches for communities, the trend for closures is likely to continue.

“It’s obviously not going to go to zero, but I would expect it to continue,” said James Barth, a finance professor at Auburn University, according to S&P Global Market Intelligence. “Banks are deciding you don’t need as many branches. You need them in strategic locations where you can have the biggest bang for your buck.”

Part of the thrust behind the Fed’s study is that consumer and community groups have, in recent years, raised concerns about the effects that bank branch closures and financial industry consolidation are having on access to financial services in low-income communities and those that were already underbanked.

The Fed, besides setting monetary policy, also does research into the economic and financial health of communities across America and examined bank branch trends and how consumers and small businesses in affected areas use bank branches to satisfy their financial needs. For parts of the study, researchers also relied on information gathered at community listening sessions.

One of the key takeaways from these listening sessions was that besides facing the hardship of reduced access to certain financial services after a bank branch closure, some community members said that even before the branch disappeared, the services were inadequate. Several people described how bank employees told them outright that “the bank did not lend in their community.”

The Fed also noted a substantial drop in the number of bank headquarters located in rural markets, with more than 100 banking markets going from hosting the headquarters of at least one bank to containing no bank’s headquarters. The researchers pointed out that nearly all of the markets with no bank headquarters were rural.

Community stakeholders said that this development could have a negative impact on local markets as “banks are more attuned to the needs of the communities in which they are headquartered.”

The Fed called for more research to determine whether there is “a material effect on the availability of credit or other financial services when an area loses the headquarters of a bank, irrespective of whether there is a change in the number of bank branches in total.”

During the five-year period studied, there was a 14 percent drop in the number of bank branches in rural areas, compared to a 9 percent decline in urban communities, which were also affected by the trend of branch closures.

The report found 44 counties that it called “deeply affected.” These were counties with 10 or fewer branches in 2012 and by 2017, they had lost at least 50 percent of those branches. Thirty-nine of these counties, or 89 percent, were rural.

The authors pointed out that the research only targeted those regions that saw recent declines in bank branches and did not highlight the plight of chronically underserved communities known as “bank deserts.”

“There are many areas of the country that struggle with access to financial services, including many rural and tribal communities,” the Fed noted.

Use of Bank Branches by Small Businesses

Most small businesses prefer to use local banks, the Fed says, because of favorable credit availability and terms. Following branch closures, small businesses have sought to meet their credit needs through online lenders, but some that have done so reported lower levels of satisfaction and expressed concerns about transparency in conditions and cost.

“The shift from local to online lenders appears to be more prevalent among credit-challenged small business borrowers than it is among small businesses at large,” the Fed noted.

Firms with better credit, the Fed said, as well as older firms, and those looking for asset-backed loans, have tended to seek farther away lenders to meet their credit needs.

The first key takeaway is that while technology has helped people cope with the drawbacks of bank closures, online banking is not a perfect substitute in some communities due to technical, skill, cultural, or preference barriers.

Some people told researchers that they felt restricted by the shift to online banking because the offerings available to them lacked certain features or services.

Others pointed to problems with broadband internet and cellular phone coverage, which were said to be “not sufficient, reliable, or affordable enough in their communities to allow for a substitution to online banking.”

Older community members were those most constrained by shortcomings in digital literacy.

Some expressed a preference for in-person services and a concern about a greater risk of fraud when using online platforms.

Finally, people pointed to the need for services like safety deposit boxes and cash deposits or withdrawals, which require a physical facility.

The second key takeaway is that not all deposit-taking institutions that offer banking services were direct substitutes for lost branches.

Some people said the suite of services provided by large bank branches were not matched by the institutions—online banking or others, like credit unions—that are available in their place. However, some participants told the researchers that big banks also did not provide services that took the local conditions into consideration, for instance, they “did not want to loan money on larger parcels of land beyond the home itself and the first acre.”

In some cases, credit unions have moved into markets that experienced bank branch closures to provide financial services, people told the Fed research team. They said that credit unions, however, have not met all their needs, with people noting such examples as “lack of robust small business account and credit products, overly restrictive lending policies, a lack of direct deposit services for employers, and low maximum cash withdrawal limits.”

The third key takeaway is that some nonbank financial service providers are filling critical service gaps, but are doing so at a higher cost and leaving some needs unsatisfied.

In general, while participants were finding ways to meet their financial service needs, many reported a lack of ready substitutes in their local community and so had to either forego services or travel long distances for access.

In regard to the types of services this pertained to, “the most common examples cited by participants included agriculture and small business loans, business checking accounts, merchant card processing services, and direct deposits.”

The fourth key takeaway is that small businesses, seniors, and people lacking consistent and reliable transportation suffered the greatest hardships when bank branches were shuttered.

The fifth key takeaway is that the impacts of a bank branch closure went beyond just financial service access and effected the “character and strength of their community.”

The sixth key takeaway is that people reported frustration and disruption due to bank branch closure in their community.

One cause of frustration was insufficient notice that a branch was going to close, and “as a result, they felt they had to scramble to restructure their financial lives.” Another source of frustration was what people understood to be a lack of willingness for bank officials to work with members of the community to find ways to keep the branch open.

Some participants said the “considerable disruption” that switching financial services providers caused them had “eroded their trust in financial institutions, and made them feel as though they had a lack of control over their financial lives.”

Some banks, on the other hand, according to a survey of community banks by the Conference of State Bank Supervisors (pdf), say that keeping branches open in communities that offer limited and declining business prospects, is an operational risk.

“Some bankers described being trapped in ‘shrinking’ rural markets that ‘are saturated and economically stagnant,'” the survey found, making it a challenge for banks to attract deposits to fund lending.

Another pressure factor for banks was the high cost of funding.

“One community banker noted that given ‘the recent rise in funding
costs and the flattening yield curve, it is difficult to attract local deposits,'” the survey noted.

“Community banks are the lifeblood of rural America and the heart and soul of our small businesses and communities,” said Bret Afdahl, Chairman of the Conference of State Bank Supervisors.

He also urged greater awareness of the “changing needs and concerns” of community banks in order for them to adapt to changing market conditions more effectively and serve local communities better.