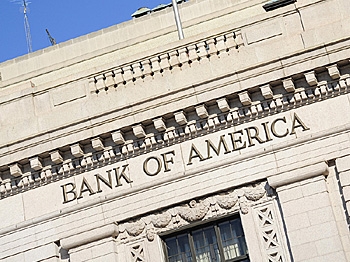 B of A Reports Loss, Merrill Gamble Backfires

On the same day, Merrill announced a record fourth-quarter loss of $15.3 billion.

At a conference call with investors to discuss BofA’s $1.79 billion loss, CEO Ken Lewis offered a less optimistic forecast for the U.S. economy, and suggested that the economy may not stabilize until at least the latter portion of 2009.

The bank also reported a huge jump in consumer credit card defaults—at 7.2 percent—which is closely tied to consumer wealth and unemployment. CFO Joe Price warned investors that credit card loss rates at the bank are expected to exceed unemployment rates in the future by about one percentage point.

Last year, BofA—the most financially sound large bank at the time—was applauded by both the market and the U.S. government for its efforts in rescuing smaller, more financially distressed competitors.

In July of 2008, BofA spent $2.5 billion to acquire Countrywide Financial Corp., a leading subprime loan originator and servicer. The subprime mortgage crisis had crippled the once leading mortgage company in the United States, and BofA’s rescue was viewed as a stabilizing factor for the market at the time.

In September, BofA pulled out of negotiations to purchase investment bank Lehman Brothers Holdings to strike an eleventh hour deal with Merrill Lynch, which it deemed to be financially healthier.

The deal with Merrill was widely applauded at the time, but as the United States sank deeper into a recession, losses at Merrill began to mount and BofA looks more like the “financial supermarket” that Citigroup is desperately trying to break up.

According to reports, BofA realized soon after its purchase that losses at Merrill were spiraling out of control and sought a way out of a deal, only to be rejected by the U.S. Treasury, a major shareholder of the bank.

"As we saw the anticipated loss accelerating, we reevaluated our rights under the deal," Lewis said on the conference call. "The government was under the view that walking away would cause significant concerns and serious systemic harm to the financial markets."

Lewis concluded that although the deal is a huge risk to his company, he was “doing the right thing for the country.”

"They were probably one of the best banks out there balance sheet-wise until they did the Merrill deal,” Cassandra Toroian, Chief Investment Officer at Bell Rock Capital, said in an interview with Reuters.

In return, the Fed struck a deal with BofA last Friday to inject $20 billion more in capital to help the bank absorb Merrill’s deepening losses, most of which came from its holdings in collateralized debt obligations.

The loss also forced the bank to slash dividends to just a penny from 32 cents a share. BofA already halved its dividend last quarter.

Some analysts questioned the role of the Treasury as a shareholder. On one hand, the Fed is ensuring that banks such as BofA survive, yet it forced the bank to swallow assets it did not want at the expense of other common shareholders.

Asked on the call when the bank would sell the Fed’s preferred shares, which have 8 percent dividends, Lewis replied, “I wish I knew.”