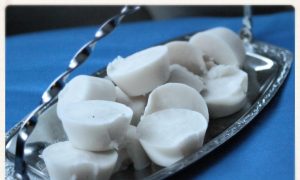 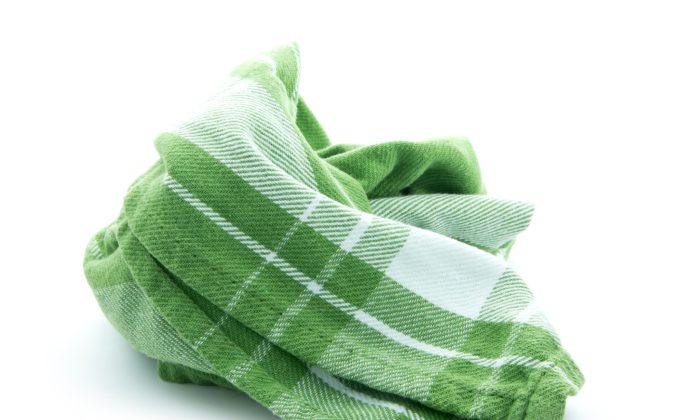 I splashed a little coffee on the counter when I topped up my cup this morning, so I grabbed the dishcloth out of the sink and swabbed it up. Then I picked up my cup and shuffled back to the couch and my laptop for some web surfing. I rubbed my itchy nose as I sat down and immediately gagged a little bit… the dishcloth I had used to “clean” my counter was stinky enough to transfer its funk onto my hand.

“Gross”, I thought. “I’d better do the kitchen laundry today”. And since I was sitting with my laptop anyway, I googled “Stinky Dishcloths” to see what I could come up with for a cleaning method.

Normally I do all my whites and kitchen laundry using the Sanitize cycle on my delicious new fire-engine-red front loader. However, that cycle takes a loooooong time, and since I’ve been pinching the pennies I don’t want to give to our local power company, I’ve been shying away from using so much super-hot water. Instead, I’ve just been washing that load with cold water and a dash of washing soda along with the regular detergent for added whitening and deodorizing.

Clearly that’s not cutting it for my dishcloths which kind of smell like they’ve been marinating in the Bog of Eternal Stench. Even the clean ones smell like the inside of a gym bag.

You know what Google told me? If you use your dishcloth for three days in a row (some of you are clutching your pearls at the thought of keeping it in rotation for that long… the rest of us are whistling uncomfortably at the ceiling), it can harbour up to 37,000,000 counts of bacteria and 112,000 counts of yeast and mould. And that’s… shockingly disgusting. This count includes notorious bugs such as e coli, salmonella, listeria, and staphylococcus aureus — the ones that can give you all kinds of repulsive illnesses (think food poisoning) in high enough concentrations.

Realistically, the fact that your dishcloth is regularly contaminated is probably not a big surprise to anyone, especially if you watch How Clean is Your House? (a pleasure of which I am thoroughly guilty). But the numbers in that microorganism count were high enough to make me sit up and think a little harder about my kitchen hygiene. I haven’t ever poisoned myself (or any household inhabitants), but now I have kids, and their little immune systems are much more susceptible to these kinds of intruders. Besides that, kids are tiny dirt-making machines, making vigilance a necessity.

Washing your dishcloth after a day’s use with really hot water, lots of detergent and bleach seems to be answer 1. However, this requires organization which I don’t possess a whole lot of. It also requires that you do laundry fairly regularly, and not everyone has the luxury of their own machine. So this, while being the most obvious, is not a universal solution.

The second best thing you can do, says the internet in a general sort of fashion, is soak your dishcloth every night in a sinkful of hot water and some bleach. This isn’t such a bad answer, really, and I used to do this in my university days (though not every night because I was, of course, a happy-go-lucky-and-to-parties kind of student). This trick does take the fetor out of your cloth quite neatly, but not everyone is down with bleach and that is definitely fair enough, environmental and health concerns considered. You could try to soak them with hot water and vinegar, but I think you would need pure vinegar to kill all those germs, and that can get costly, not to mention cause a whole different kind of funk in your kitchen.

There is, however, a very simple remedy for this common kitchen curse that anyone out there can use. The best part about said remedy is that it is not high-tech, not overly aromatic, and it doesn’t require you to go out and buy fancy chemical-laden, bug-killing soaps or cleaners. It is, in fact, a method that is as old as the word “laundry”. What is this little gem of a device? Well, you stick your cloths in a pot of water and boil them.

I know. So simple it’s stupid.

Boiling your dishcloths in a large pot for about ten minutes will kill most of the bacteria that have decided to turn your innocuous cleaning tool into a weapon, and with those little buggers goes their reek. After boiling the cloths, you can either toss them into the wash with your next load of whites (but let them dry if that’s not going to be for a few days!) or even just rinse the dishcloths in cool water, wring them out and hang them to dry. The sniff test I conducted after using this method of sterilization concluded that my cloths smelled brand-new and line-dried and prompted me to resolve to change my dishcloth every night… a resolution that lasted about one day. Luckily, I can just keep boiling them. Now,when I have about a potful’s-worth, I just cook up a batch and I’m back to stink-free cleaning with an easy conscience.

No germs, no chemicals, no fuss. Just the way I like it.