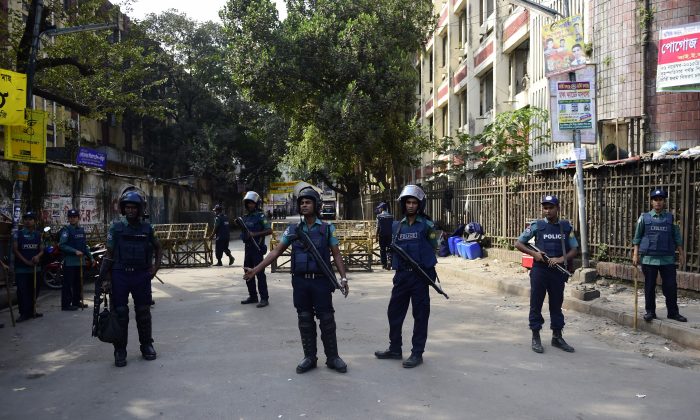 Those detained in a raid in Mirpur area in the Bangladeshi capital included at least three “important figures” of the Jumatul Mujahedeen Bangladesh, or JMB, police officer Monirul Islam said.

Islam said the search of a residential building led to a huge cache of bombs and grenades and other explosives. The suspects exploded bombs as the raid started, but no one was injured, he said.

Officials cordoned off the building and evacuated other residents, he said.

The raid followed information gathered from another member of the group who was arrested earlier, Islam said.

The group was founded in 1998 by Shaikh Abdur Rahman, a religious teacher educated in Saudi Arabia.

According to Islam, at least 20 locally made grenades found in the building are similar to others recovered from the group’s members or the sites of previous attacks. He said the building was used for bomb-making.

A wave of deadly assaults this year on foreigners, secular writers and members of the Shiite community in the Sunni-majority nation, claimed by radical Islamist groups, have alarmed the international community and raised concerns that religious extremism is taking hold in the traditionally moderate country.

The ISIS group and a local affiliate have claimed responsibility for the killings of two foreigners — an Italian aid worker and a Japanese agricultural worker — as well as for attacks on the Shiites.

Bangladesh’s government has repeatedly said that ISIS has no organizational presence in the country. It accuses domestic Islamist groups along with the main opposition Bangladesh Nationalist Party and its main ally, the Jamaat-e-Islami party, of carrying out the attacks to destabilize the South Asian nation for political gains.