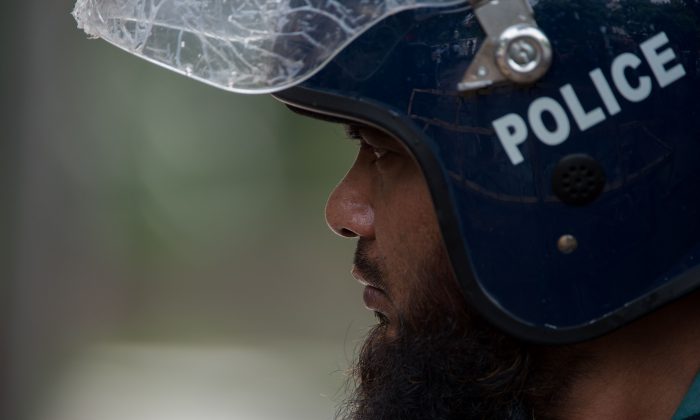 A Bangladeshi policeman mans a road block near a cafe on July 3, 2016, a day after a bloody siege at the restaurant came to an end. (Roberto Schmidt/AFP/Getty Images)
Asia & Pacific

DHAKA, Bangladesh—Security officials searched on Sunday for evidence and the possible masterminds of the weekend hostage-taking in an upscale restaurant in Bangladesh’s capital. The government has denied the Islamic State’s claim of responsibility for the attack that left 28 dead, including six attackers and 20 of the hostages.

Police released photographs of the bodies of five attackers, along with their first names: Akash, Badhon, Bikash, Don and Ripon. The men belonged to the banned domestic group Jumatul Mujahedeen Bangladesh, or JMB, and their families hadn’t heard from them in months, according to police. Asked whether they might also have had Islamic State (ISIS) ties, Police Inspector General A.K.M. Shahidul Hoque said authorities were investigating that possibility.

Despite the police saying ISIS links were being investigated, the home minister refuted the possibility that ISIS directed the attack from abroad. Bangladesh’s government insists the extremist Sunni Muslim group based in Syria and Iraq has no presence in the country, and in the past has suggested that any claims of responsibility for violence waged in the South Asian country are simply opportunistic attempts at grabbing global attention.

“They are all Bangladeshis. They are from rich families, they have good educational background,” Khan said of the attackers. One surviving suspect was detained when paramilitary forces ended the 10-hour standoff Saturday morning, and authorities said he was being interrogated.

The siege marked an escalation in the militant violence that has hit Bangladesh with increasing frequency. Most of the attacks in the past several months have involved machete-wielding men singling out individual activists, foreigners and religious minorities.

“Anyone who believes in religion cannot do such an act,” Hasina said Saturday. “They do not have any religion, their only religion is terrorism.”

On Sunday morning, the first of two days of national mourning for the victims, police were blocking all access to streets near the Holey Artisan Bakery where the siege occurred. Investigators from both Bangladesh and Japan visited the restaurant to collect evidence.

The 20 hostages who were killed included nine Italians, seven Japanese, three Bangladeshis and one Indian teenager. Two police officers were killed by the attackers, and 13 people were rescued when commandos stormed the restaurant Saturday morning. Another 25 officers and one civilian were wounded, and some of the rescued hostages had injuries. The hospitals treating them would not give fresh information on their conditions Sunday.

The attack was the worst in the recent series of attacks by radical Islamists in the moderate, mostly Muslim nation of 160 million. Unlike the previous attacks, the assailants were well-prepared and heavily armed with guns, bombs and sharp objects that police later said were used to torture some of the 35 captives.

That the attackers targeted a popular restaurant in the heart of the diplomatic quarter of Bangladesh’s capital signaled a change in tactics. The restaurant overlooking a lake serves Spanish food and is patronized by residents of Gulshan, an affluent neighborhood where most of the foreign embassies are located.

The hostages were asked to recite verses from the Quran, to prove themselves Muslim, according to a witness. Those who passed were allowed to eat. Those who failed were tortured and slain.

Western embassies issued travel warnings to their citizens, advising those in the country to be vigilant and avoid places frequented by foreigners in the diplomatic zone. The U.S. Embassy also urged its citizens and personnel to avoid traveling on foot or in open vehicles exposed to potential attackers.

In its claim of responsibility, ISIS said its operatives had targeted the citizens of “Crusader countries” in the attack, warning that citizens of such countries would not be safe “as long as their warplanes kill Muslims.” The statement was circulated in a manner consistent with past ISIS claims of responsibility.

The Amaq news agency, affiliated with ISIS, also published photos of five smiling young men, each holding what appear to be assault rifles and posing in front of a black ISIS flag, and identified them as the restaurant attackers, according to the SITE Intelligence Service, which monitors jihadi online activity. The men in those photographs appeared to match the bodies shown in police images of the dead assailants in the restaurant after the hostage crisis ended.

Amaq identified the five by noms de guerre indicating they were all Bangladeshis. It said the fighters used “knives, cleavers, assault rifles and hand grenades,” and had “verified” the identities of the hostages in order to spare the Muslims and kill the foreigners.

A Timeline of the Weekend Hostage Crisis in Bangladesh

10 p.m.—Two policemen are injured in firing and throwing of bombs or a grenade by the gunmen who have taken over the restaurant, with some 35 people inside.

10:30 p.m.—Explosions heard from inside the restaurant.

10:55 p.m.—Bakery worker Sumon Reza escapes from the restaurant and says the attackers shouted ‘Allahu Akbar’ (God is Great) when they entered.

11:20 p.m.—Bangladesh security asks TV channels to stop live broadcasts, citing security reasons. A security official says authorities are trying to listen for demands from the militants, and that saving the hostages is the first priority.

1 a.m.—The two officers who were hit by bullets in the initial police response to the crisis succumb to their injuries in a hospital, according to police.

4 a.m.—Gunshots are heard again from inside the restaurant.

6:10 a.m.—Bangladesh security and Rapid Action Battalion say they are ready to launch a rescue operation.

3:50 p.m.—India’s foreign minister says Tarishi Jain, a student at UC-Berkeley, was among the hostages killed.

6:30 p.m.—Pope Francis condemns the Dhaka restaurant attack as an “offense against God and humanity.”

7:45 p.m.—Italian Foreign Minister Paolo Gentiloni says the bodies of nine Italians have been identified among the dead.

Midnight— Police release photographs of bodies and names of five militants killed inside the restaurant.

10 a.m.—Members of the Criminal Investigative Department of Bangladesh enter the restaurant to collect evidence.

2:10 p.m.—Bangladesh’s police inspector general visits wounded officers in hospital, says the attackers were members of the banned domestic militant group Jumatul Mujahedeen Bangladesh, or JMB., but that authorities are also investigating whether they had any ties with Islamic State.