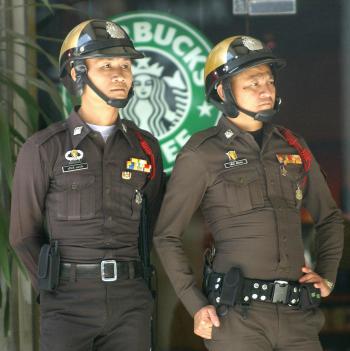 Thai police outside one of the over 30 Starbuck coffeehouses in Bangkok. (Adek Berry/Getty Images)
Opinion

James Burke
biggersmaller
Print
BANGKOK—I’m looking at the covers of the English language magazines displayed at a local news agency in what can easily be described as down town Bangkok.

There’s American actor James Franco on the front of Esquire and next to him is a big smiling muscle man on the cover of a bodybuilding magazine. Under them, on the shelf below is an interior decoration magazine with Martha Stewart on the front while a more ‘arty’ interior design publication features a young women minus panties with her bare bottom in full view, the cover-line that says ‘our cheekiest’ issue ever.

I’ve now got a bad taste in my mouth, not because the magazine’s cover has shamelessly gone pornographic but I’ve just taken my first sip from my espresso coffee and its tastes like cigarettes.

My brain is now on two trains of thought.

One part wondering if the ‘arty’ interior design magazine’s editor’s reasoning behind the bare behind was sales or just a bad call.

The other part of my brain, which is hooked on caffeine, is dealing with the possibility that the local espresso bar, which had made decent coffee in the past (a rare find in Bangkok), has now dropped its game.

In my search for a decent coffee in Bangkok I’ve discovered there are over 30 Starbucks coffeehouses that I can resort to. From where I’m standing in the news agency, I know of three Starbucks within walking distance, each providing over the top espresso drinks like coffee jelly frappuccino blended coffees, or iced caramel coffee jelly café lattes.

But even a large no-frills coffee, such as a latte or a cappuccino, at Starbucks will cost you about three times what you would pay at a street stall for a lunchtime meal of pork, some leafy greens, and rice accompanied by a small bowl of soup.

Guess it helps also if the product you are selling is addictive and where you sell it has air conditioning, and that the staff there are multilingual.

But back on Bangkok’s noisy side streets called “sois” (pronounced “soys”) you can find local cart vendors selling iced black coffee, which if you ignore the risk of the ice coming from an unknown water source, might be a sensible choice given the city’s climate.

The Thais call it o-leang and it contains 40 to 50 percent sugar syrup. The balance is water, ice, coffee, and you can add condensed milk, sesame, corn kernels, or soybeans as you wish.

I’m not sure how long o-leang has been around but espressos have been here since 1822 when the first simple machine was fashioned by the French and then perfected by the Italians.

While not to the degree I’ve witnessed in Italy, coffee in Thailand plays a role as a social beverage, and the locals have a saying “talk politics over coffee.” Considering the ongoing saga that is Thai political affairs, with its color-shirted movements, and dubious backroom deals, there always seems plenty to discuss over a coffee or two, be it espresso, or the local brew.