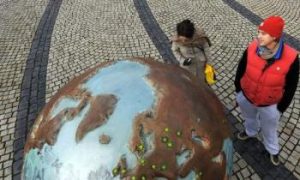 Welcome to Thailand, where everyone knows the rules and everyone ignores them.

The first time I drove a car through Bangkok’s notorious traffic I broke out into a cold sweat.

That apprehension is about all I can recall from that maiden voyage through the roads of my local suburb.

A year later and I still wouldn’t say that driving in the Thai capital has become a joy, but now I know what to look out for and what to expect.

While a challenge, driving in Bangkok does have its lighter moments. This morning we drove past a fresh produce market where a middle-aged woman wearing ruby red lipstick, a pretty floral dress, and a World War II German military helmet on her head was getting onto her motorcycle.

In Bangkok, it’s not totally odd to wear something such as a military helmet on your head while riding a motorbike—I’ve seen gridiron and baseball helmets worn and construction hats too.

Beyond their choice of head protection, by and large motorcyclists here are a daring bunch.

They drive on sidewalks, down the wrong side of the road, talk on cell phones while riding and on occasion carry up to four passengers. They must have the lowest life expectancy of anyone in Thailand.

But on top of the Bangkok traffic food chain are the city’s public buses that somehow weave in and out of the traffic like a hot knife through butter. So feared for their boisterous driving, buses here are given wide berth by everyone else on the road.

In order to get from A to B, one thing anyone driving in Bangkok needs to learn is the subtle, or not so subtle, art of pushing your way in to traffic, because if you didn’t, you’ll get no where.

One thing about driving in Bangkok is that it appears road rules aren’t well adhered to and as one long-term expat resident quipped, “Welcome to Thailand, where everyone knows the rules and everyone ignores them.”

Most Thais seem to appreciate that if all drivers actually followed the laws, then nobody would get anywhere, and everyone would be stuck in city’s famous gridlock.

Meanwhile, Bangkok traffic cops last week announced another tool in their arsenal to bring order to the streets: grinning mannequins dressed as police to be placed at strategic roadside positions to remind drivers to keep road rules in mind. Whether these grinning mannequins will solicit bribes, as their living counterparts are famous for, is another thing.

Needless to say, driving in Bangkok takes some getting used to but if there is one positive attribute that many Thai drivers seem to share, it is patience and if you do push your way in, more often than not, oncoming traffic will let you in if safety permits.

When I first started driving here my wife liked to tell me that once I’ve mastered Bangkok I’ll be able to drive anywhere.

Recently she said I’m now driving like a Bangkokian and I’m still trying to decide on whether she meant it as a compliment or not.