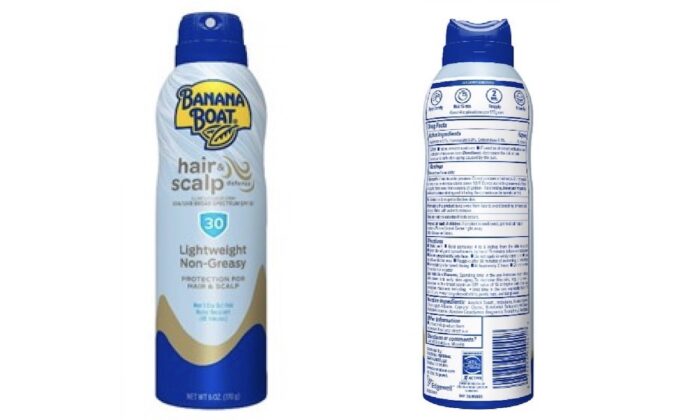 Some Banana Boat sunscreens have been recalled because some samples were found to have unexpected levels of benzene, a cancer-causing chemical.

“An internal review found that some samples of the product contained trace levels of benzene. While benzene is not an ingredient in any Banana Boat products, the review showed that unexpected levels of benzene came from the propellant that sprays the product out of the can,” according to a July 29 statement from the company.

“Importantly, no other batches of Hair & Scalp (either before or after these batch codes) and no other Banana Boat products are in the scope of this recall and may continue to be used by consumers safely and as intended,” the announcement reads.

The sunscreen sprays, which are packaged in aerosol cans, were distributed nationwide across the United States through multiple retailers. Edgewell has notified retailers to remove the recalled products from shelves.

People who purchased any of the recalled products will be offered reimbursement by Banana Boat.

Benzene has been classified as a human carcinogen. It exists as a colorless or light yellow liquid at room temperature, and has a sweet odor. It is highly flammable.

People can be exposed to the chemical via inhalation, orally, and via the skin. It can potentially result in cancers, including leukemia and blood cancer of the bone marrow. It can also result in blood disorders that can kill.

“To date, Edgewell has not received any adverse events related to this recall. Benzene is ubiquitous in the environment,” the company said. “Humans around the world have daily exposures to it indoors and outdoors from multiple sources. Daily exposure to benzene in the recalled products would not be expected to cause adverse health consequences according to an independent health assessment using established exposure modeling guidelines.”

This recall is being conducted with the knowledge of the U.S. Food and Drug Administration.