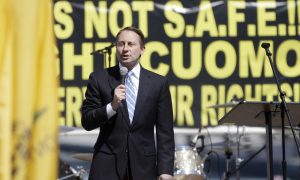 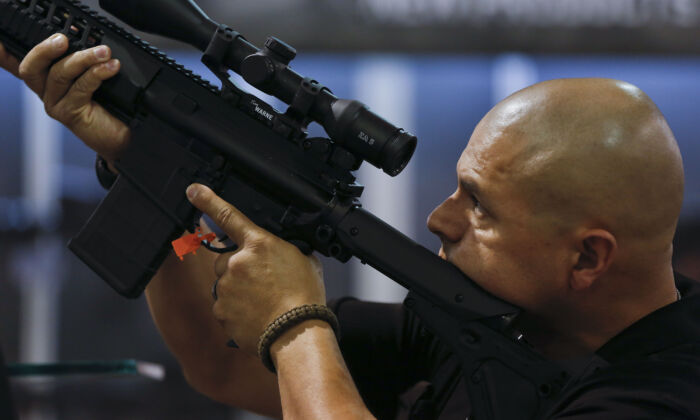 Michael Wright, of the Montgomery County Sheriff's office in Conroe, Texas, looking through the sight of a rifle at the Shooting Hunting and Outdoor Trade Show in Las Vegas, on Ja.14 2019. (AP Photo/Julie Jacobson)
US

A surprise change to a decades-old law could cause the supply of a cheap, widely-used sporting ammunition to dry up. On February 13, the Bureau of Alcohol, Tobacco, Firearms and Explosives (ATF) issued proposed changes to the 1968 Gun Control Act.

A key change in the new rules is to the M855 “green tip” bullet. The relatively small caliber bullet is sold as military surplus. It is widely used for target practice because of its ability to accurately, cleanly and directly pierce paper targets and it’s low price—as low as 35 cents a round.

The ATF says that the bullet should be taken off the market and out of production because firearms are available now that weren’t when the rule was last reviewed in 1986. AR-15 pistols are a recent development. According to the ATF, today there are both handgun and rifle versions of AR-15s that “utilize the same magazines and share identical receivers.”

This increase in handgun versions of rifle platforms, which the M855 bullet is used for, is a particular problem for law enforcement. Handguns are the weapons of choice for criminals, which the ATF argues puts law enforcement officers at risk.

The problem for the government: the M855 bullet can pierce soft body armor worn by many rank-and-file police officers.

“These AR-type handguns were not commercially available when the armor piercing ammunition exemption was granted in 1986,” wrote the ATF in their decision.

“This is so out of the blue that they would even attempt this. This was completely unexpected,” said Bob Owens, editor of firearms news site BearingArms.com. “They took an existing law that’s been in place for 29 years and carved out this completely odd interpretation of it.”

He said that in essence, he thinks the move is purely political, especially since AR-15’s are “by far the most commonly sold firearms” in the United States, with about over 5 million in circulation.

“I’m interpreting it as revenge for not being able to get the assault weapons law passed.”

The worry for those who use the bullets is that there could be a major shortage or price hike on the bullet.

I’m interpreting it as revenge for not being able to get the assault weapons law passed.
— Bob Owens, BearingArms.com

A search on the gun sale aggregating website WikiArms on Monday, less than four days after the proposed change, showed that price and availability are already being impacted. Some ammunition sellers have started to charge in the range of 50 cents to one dollar per bullet and others have started to sell out completely.

At the national sporting goods store Cabela’s they haven’t sold the bullet for about two years. A Cabela’s supplies representative said on Monday that after the Sandy Hook shooting in 2012, when there was widespread momentum for massive bans on all types of weapons and ammunition, their stores sold out of the bullet. They simply never re-stocked it.

A ban on the bullet widely used by sporting enthusiasts and those who want a cheap option for target practice poses a problem for others, too.

Tim Harmsen, a self-described gun enthusiast who produces weekly video commentaries on the Full30.com platform said that the proposal makes no sense.

“Most people just use it to shoot holes in paper,” said Harmsen. “It’s easily one of the most common in the united states.”

The M855 bullet is so popular and used for target practice in so many guns in America that there is only one main alternative to it in terms of price: the M193.

But according to Owens, the impact of the M193 when shot into a target is considerably more damaging that an M855. He describes the M193 as ammunition that is weighted toward the butt end of the bullet that then tumbles and creates multiple wound channels. Body-armor piercing or not (as is basically any bullet fired from a rifle) the M855 tends to cause minimal damage to targets. That’s part of the reason that it is being phased out of use by the military in combat.

“If you were shot by anything you’d rather be shot by this [the M855],” said Owens, who describes it as ammunition that “would just punch a small hole.”

The public has 30 days from February 13 to comment on the proposed amendment.