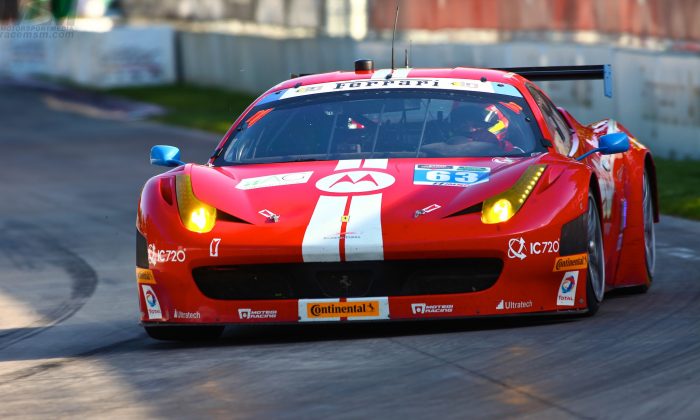 Westphal and Balzan took their #63 Ferrari 458 Italia from seventh at the start to the top of the podium by the end of the 100-minute street race, finishing three-tenths of a second ahead of the #23 Team Seattle/AJR Heart of Racing Porsche GT America in the hard-fought 57-lap battle.

Jeff Westphal drove the opening stint. He had advanced the bright red Ferrari to third in class when Henry Cisneros stuffed his #32 Momo NGT Porsche into the tire barrier, bringing out a full-course caution.

Good pit work got the #63 Ferrari up to second, with Alessandro Balzan behind the wheel for the lap 27 restart, trailing Tomy Drissi’s #18 Muehlner Motorsports America Porsche which hadn’t pitted. When Damien Faulkner crashed the #673 park Place Porsche on the restart, bringing out another yellow flag, Drissi came in, giving Balzan the lead.

“We knew coming into the race it would be relatively difficult to pass, due to the nature of the track being a street circuit,” Jeff Westpahl told IMSA. “To our displeasure the engineers put us through hours of driver change practice. So really it came down to hitting our marks and doing what we practiced.

“We knew we needed to make a quick stop so we made it as quick as we could. Everything went off without a hitch. We were able to get out with some extra spots because of the pit change and it was the best result we could have had.”

Spencer Pumpelly in the #45 Flying Lizard Audi LMS won the GTD pole and chased hard for the class win until he ran into the marbles, then collided with Townsend Bell. (Halston Pitman/MotorSportsMedia)

The Ferrari driver stayed in front for the rest of the race, despite constant pressure from Spencer Pumpelly in the pole-winning #45 Flying Lizard Motorsports Audi R8 and Mario Farnbacher in the #23 SeattleAJR Porsche.

“Scuderia Corse is back I am very happy for this because the guys deserved this since Daytona and Sebring, but we had a lot of problems,” Alessandro Balzan told Fox Sports after his victory.

“Sure, we don’t have the fastest car out there but today it was fine. The race was really hard because there are ten or fifteen different cars and drivers which can win.

“I want to thank Jeff Westphal because he drove an amazing first part of the race, and the guys at Scuderia Corse they gave me a very good set-up of the car it’s a great day for us. We expected to be in the top five, but first is good.”

The Tudor United Sportscar Championship heads for upstate New York after the Le Mans break, where the Sahlen’s Six Hours of the Glen will involve all four Tudor Championship classes. Visit IMSA.com for more information or the Watkins Glen website to purchase tickets online.

The #22 AJR/WeatherTech Porsche 911 GT America of Cooper MacNeil and Leh Keen battle with the #007 TRG-AMR/B+ Foundation Aston Martin Vantage of Al Carter and James Davison during the Chevrolet SportsCar Challenge, May 31, 2014. (Halston Pitman/MotorSportsMedia)