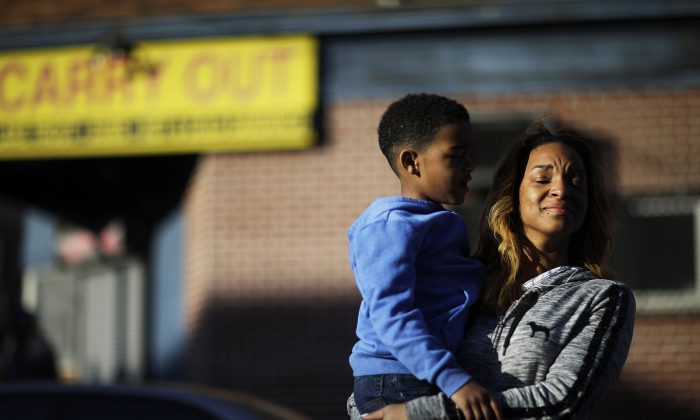 Cierra Powell and her son, Keon Lovitt, 6, at an outdoor church service a block from Monday's riots after the funeral for Freddie Gray, who died in police custody, in Baltimore on April 28, 2015. (AP Photo/David Goldman)
US

The deeper issues involved in the death of Freddie Gray, and the protests, riots, looting, and arson in Baltimore that Gray’s death sparked, go back to the 1600s, according to one scholar who is working to change this long-standing situation.

He has created a program to hire “street corner guys,” develop their skills, and transition them into “quality jobs,” he said.

Media coverage of what Twitter calls the Baltimore Uprising varies from thoughtful and deep to “if it bleeds it leads.”

Comedian Jessica Williams satirized CNN reporters for seeming like the unsympathetic broadcast personalities in “The Hunger Games,” when they feasted and laughed at the White House Correspondents’ Dinner while not reporting that Baltimore caught fire on April 25.

I had been following the stories of police and protests closely since Michael Brown died in Ferguson, Missouri, last summer, and I wanted to do a better job.

So I took a Poynter News University class, “Handling Race and Ethnicity.” There was a quiz about how well you understand race and ethnicity. My score humbled me. Which is a good place for a journalist to start.

Trusty Poynter also directed me to the words of the late, great journalist Dori Maynard, who died in February after a distinguished career in which she always advocated for more diverse newsrooms. Maynard wrote that the clichés of “coded language masks some lack of in-depth understanding of the issues. When I hear ‘there are racial tensions,’ a.) I don’t know what that means, b.) I don’t know why there are tensions …”

The tensions in Baltimore are specific.

Freddie Gray died of a spinal injury one week after Baltimore police arrested him on April 12. The cause of his injury has not been made clear, but it happened either during his arrest or on a van ride to jail, when he was shackled and not wearing a seat belt.

Baltimore City State’s Attorney Marilyn Mosby held a press conference on May 1 in which she announced that six officers will be charged with homicide in Gray’s death.

As many of the men in Baltimore are saying, ‘this happens all the time.’
— Dr. Yasser Payne, University of Delaware

On April 27, the night of his funeral, some people set fires and looted, while others protested peacefully. At least 20 police officers have been hurt.

The Baltimore Police Department has paid millions of dollars to settle lawsuits over excessive force against citizens, the Baltimore Sun reported. The Department of Justice has been investigating BPD since 2014.

Payne said, speaking of people who rioted, “Baltimore has extreme poverty.” A Johns Hopkins global study found that black men in Baltimore were poorer than black men in Nigeria. Some youth in Baltimore had worse conditions and worse health outcomes than youth in cities in India and Africa.

The unease between black men and law enforcement started with slave patrols in the 1600s, according to Payne. There has never been harmony between the two groups. “As many of the men in Baltimore are saying, ‘this happens all the time.’ My point is this is normal. What is unusual is that it’s getting so much attention.”

He laughed, speaking of presidential candidate Hilary Clinton’s recent speech when she proposed to bring back balance between the two communities. While he said he appreciated that Clinton addressed the issue, he asked, “When was this nostalgic, mythic phase?” Though America has wonderful, beautiful qualities, the history and the relationship between police and black people is not good, according to Payne.

The “street corner guys” he is hiring are being trained by him to do “research on injustices, as I would graduate students. I take them with me to present their findings.” At a meeting with a chief of police, for example, he sits back while “they get front stage.”

He calls it Street Participation Action Research. It’s meant to give people a skill set to respond to injustices. And it’s meant to start a genuine dialogue. “That’s what I’m suggesting to do. We’ve been speaking to, with, against law enforcement. It’s a great way to get people into the room.”

People really care about their communities, he said, even the people who rioted in Baltimore. “It’s not either/or, it’s yes/and.”