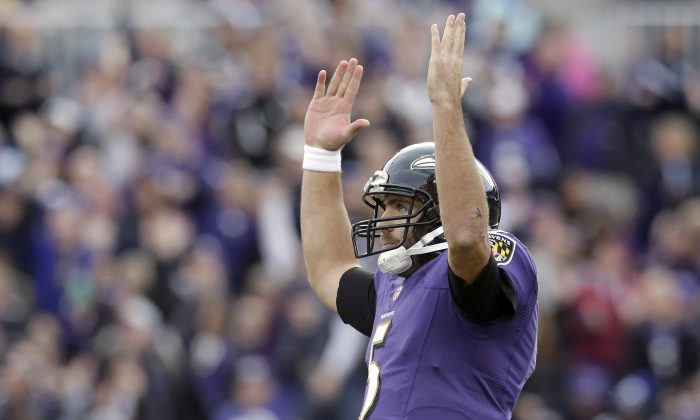 Baltimore Ravens quarterback Joe Flacco reacts to running back Justin Forsett's touchdown during the second half of an NFL football game against the Tennessee Titans in Baltimore, Sunday, Nov. 9, 2014. (AP Photo/Patrick Semansky)
NFL

The Baltimore Ravens have a bye this week, and they’re set to play the New Orleans Saints in Louisiana on Monday. Here’s some of the latest buzz:

Ray Rice probably won’t play for the remainder of the season, as few teams would want to sign him.

There’s been rumors that the Indianapolis Colts were looking at bringing Rice on board following RB Ahmad Bradshaw’s injury.

But ESPN reported on Tuesday that Indianapolis isn’t interested in signing him if he is reinstated by the NFL.

One NFL personnel executive told NJ.com that Rice probably won’t ever play in the NFL this season.

“No one is going to touch him at this point,” the official said, while remaining anonymous. “No one. It’s too late.”

Another NFL official concurred, saying: “Come on, you’re not going to deal with all of that. For what? A few weeks. I don’t see it happening.”

Flacco to have another child

Ravens QB Joe Flacco announced Thursday he and his wife, Dana, will be having another baby.

The two are expecting their third child in January, Flacco confirmed via the Ravens’ website.

“I’d be satisfied with five,” Flacco said of how many children he’s thinking about having in all.

“Kids are a lot of fun. It would be cooler to have more, but if we got to five and that was it, I’d be cool with that. I’m satisfied now, but I want as many as I could have,” he said.

Flacco noted that he grew up in a large family and is the oldest of six children. “I had such a good time growing up in a big family, so I’d like to have that,” he told the website.

“The fact that I was able to have two boys off the bat kind of got the pressure off myself,” he added. “If we do have a girl this time – or when we do have a girl – I’m going to be totally stoked. It would be great for my wife to have a daughter. I don’t know if it’s going to happen this time. I kinda think it might be a girl.”

“I don’t believe that,” he said, according to the Baltimore Sun.

“Didn’t I tell you all about the no-hitter?” Suggs later joked. “You guys are the worst. I don’t even know to answer that.”

But Brees said in all his three meetings with the Ravens, they’ve been losses. It’s the only team Brees hasn’t beat in his career.

Marshal Yanda, the Ravens right guard, has returned to practice this week.

The Ravens website posted an update, saying “Yanda wasn’t at Wednesday’s practice during the portion open to the media, but he returned to action Thursday.”

Yanda has been limited due to a knee injury.

“Yanda has gone on and off the injury report this season, but he’s known as one of the team’s toughest players and he’s started every game,” the Ravens noted.

Tight end Owen Daniels and LB Daryl Smith were on the injury report for this week.