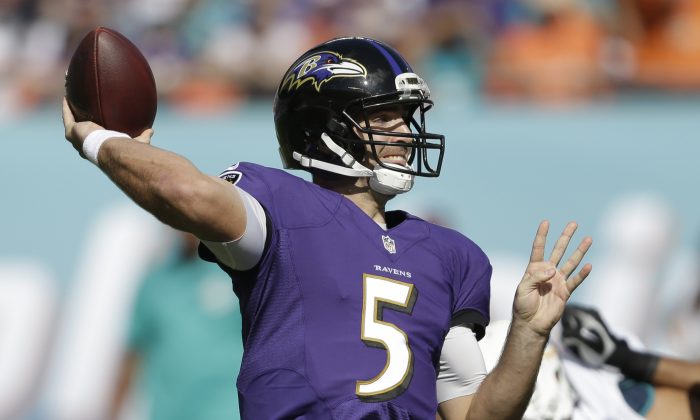 The Baltimore Ravens are slated to play the Jaguars on Sunday. Here’s some of the latest buzz:

Rice to have grievance hearing

Ray Rice will face a grievance hearing against the Baltimore Ravens on Jan. 15.

USA Today reported that a system arbitrator is slated to hear Rice’s grievances against the Ravens. No official announcement has been made, and USA Today said it obtained its information from an anonymous source.

Rice is seeking back pay for wrongful termination from the Ravens.

He was released Sept. 8–right after a video surfaced of him hitting his then-fiancee earlier this year.

Rice would have been due about $3.53 million in base salary this season.

Flacco playing at a high level

Flacco threw for 269 yards and completed more than 75 percent of his passes against the Miami Dolphins last week.

Flacco threw for two touchdowns and also rushed for one.

“I was surprised initially when I dropped back and they brought the blitz off the right side,” Flacco said of the running TD. “I just wanted to make sure that nobody really came free and just saw a big hole open up and just ran, just took it. It got the drive going and I’m glad to take those when I can.”

RB Justin Forsett recently spoke on being cut by the Jacksonville Jaguars.

“He just had some injuries when he was here, and he struggled with playing time because of that injury,” Jaguars Head Coach Gus Bradley said on Wednesday, per BaltimoreRavens.com. “It just really lingered on, and we had some younger guys at the running back spot.”

Forsett suffered a foot injury while he was playing for the Jaguars and fell to the bottom of the depth chart.

“So I wasn’t really surprised, but it was still a hard pill to swallow, knowing that you’ve been cut and didn’t know what the future was going to hold,” Forsett said of being cut. “I just kept the faith, kept working, and this opportunity came up.”