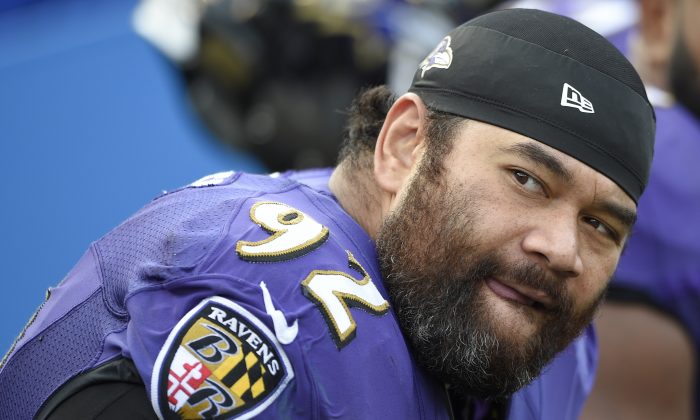 FILE - In this Nov. 9, 2014, file photo, Baltimore Ravens defensive end Haloti Ngata watches the action from the sidelines during the second half of an NFL football game against the Tennessee Titans in Baltimore. Ngata has been suspended without pay for four games for violating the NFL's policy on performance enhancing substances, the league announced Thursday, Dec. 4, 2014. (AP Photo/Nick Wass, File)
NFL

The Baltimore Ravens face the Dolphins Sunday but were dealt a serious blow after nose tackle Naloti Ngata was suspended Thursday. Here’s some of the latest buzz:

Ravens nose tackle Haloti Ngata was suspended by the NFL this week for the remaining four games this season.

Ngata, 30, violated the league’s policy on performance-enhancing substances and was suspended, the Ravens said Thursday.

“I took Adderall and take full responsibility for doing this. I am deeply sorry and broken up over this. I let down my family, my teammates, Ravens fans and myself. My hope is that the Ravens make the playoffs, and I believe they can do this. And, then I can come back and help us win.”

Ngata will be able to return to the team’s active roster Monday, Dec. 29 after the team’s last regular-season game versus the Cleveland Browns.

Ngata, according to NFL.com’s Ian Rappoport, was feeling sluggish and couldn’t concentrate, which is why he took Adderall. Adderall is used to treat attention deficit hyperactivity disorder and narcolepsy, and it is listed as a Schedule II illegal substance by the US.

The Ravens website said Supernaw takes the spot of Ngata.

“Supernaw has bounced back and forth between the Ravens’ practice squad and active roster. He spent the past three weeks in Kansas City after the Chiefs signed him to their active roster. But Supernaw was released this week and re-signed to Baltimore’s practice squad on Wednesday,” the site said.

Coach John Harbaugh said Wednesday that his team is “a little thin at tight end with just the two tight ends on the active roster, so that really helps us to have him back.”

Players sound off on suspension

Cornerback Asa Jackson said, “You feel for that guy and for his family because, as someone who has a little experience with that, I know I’m not a bad person and I know Haloti is not a bad person.

“It’s definitely difficult to hear,” Ravens WR Torrey Smith said, per NFL.com. “He’s expressed how disappointed that he is. I know he’s hurt for it, and we’re going to be hurt by it. But we have a lot of guys who have the ability and they got to step up.”

Coach John Harbaugh didn’t make any comment on Ngata’s suspension when he was asked this week.

“My thoughts are my own. They are what they are,” Harbaugh said Friday.

He added: “The important thing is preparing for this game. Getting this game right and doing what we have to do to win this game.

“That’s been my thoughts. That’s all we really have time for. Any other thought is not important.”

Ray Rice NOT going to Broncos

A viral article this week says Ray Rice is heading to the Broncos after he was reinstated by the NFL.

However, that article is completely fake. It was posted on satirical website Empire News.

According to a disclaimer, it “is a satirical and entertainment website. We only use invented names in all our stories, except in cases when public figures are being satirized. Any other use of real names is accidental and coincidental.”

The bogus article had tens of thousands of shares and “likes” on Facebook.