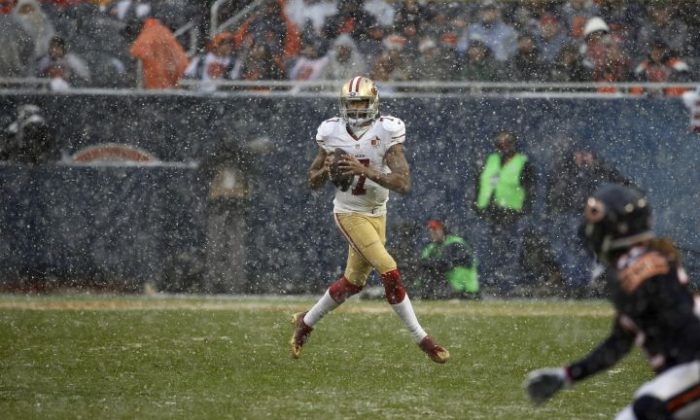 San Francisco 49ers quarterback Colin Kaepernick (7) rolls out as he looks for a receiver during the second half of an NFL football game against the Chicago Bears, Sunday, Dec. 4, 2016, in Chicago. (AP Photo/Charles Rex Arbogast)
Entertainment

Colin Kaepernick, an unsigned free agent after he voided his contract with the San Francisco 49ers, might be signed by a team after all.

Kaepernick and the Baltimore Ravens spoke, and the Ravens management is “weighing” whether to sign the quarterback, according to the Baltimore Sun.

Last year, he threw for 2,241 yards, 16 touchdowns and four interceptions. But in 2015, he fell off a cliff in terms of production, throwing for 1,615 yards, six touchdowns, and five interceptions while starting nine games and was benched for backup Blaine Gabbert.

Ravens owner Steve Bisciotti spoke about the team potentially signing the quarterback, who made headlines last season for his refusal to stand during the U.S. national anthem.

NFL Network’s Ian Rapoport also described the rumors of Kaepernick going to the Ravens as “very real” and tweeted that it “sounds like this is becoming more of a possibility.”

“We’re sensitive to it, we’re monitoring it, and we’re trying to figure out what’s the right tact. So pray for us,” he told reporter Jeff Zrebiec of the Sun.

It comes as Ravens starter Joe Flacco was sidelined for a week due to a back injury.

“He and I have been talking throughout the summer, a number of times,” he told the Sun. “We’ve had some great conversations on the phone. It’s really been a pleasure to talk to him and get to know him. I like history and politics and stuff, too, and we’ve had some debates. It’s been fun. He’s a great guy. He’s a guy right now that’s being talked about and we’ll just see what happens with that. I think it will all be speculation right now but I think he’s a really good football player. As I said at the owners meetings, I do believe he’ll be playing in the National Football League this year.”

There has been speculation that Kaepernick’s inability to find a roster spot on an NFL team is due to his anthem protesting and unpopularity.

Other players around the league joined in. A new survey from JD Power, according to ESPN, found that national anthem protests were the top reason fans watched fewer games last season.

According to the sports network:

The pollster said it asked more than 9,200 people who attended either one football, basketball or hockey game whether they tuned into fewer games and why. Twenty-six percent of those who watched fewer games last season said that national anthem protests, some of which were led by Colin Kaepernick, were the reason.

Domestic violence also was a factor.

“After that, 24 percent of those surveyed who said they watched fewer games said they did so either because of the league’s off-the-field image issues with domestic violence or with game delays, including penalties,” the report stated.