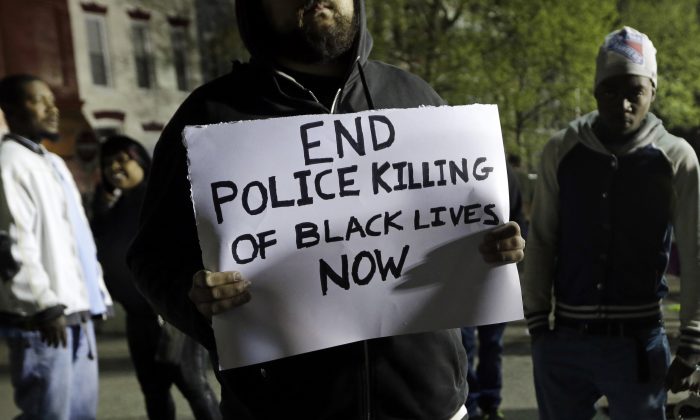 A man holds a sign during a protest for Freddie Gray outside the Baltimore Police Department's Western District police station, Thursday, April 23, 2015, in Baltimore. Gray died from spinal injuries about a week after he was arrested and transported in a police van. (AP Photo/Patrick Semansky)
US

BALTIMORE—People in Baltimore and other cities accuse police of sometimes giving prisoners an extra-rough “nickel ride” — a reference to amusement rides that once cost a nickel. Now, the safety of people in Baltimore’s police vans is under scrutiny because of a past death and a new fatal injury, one that came after police failed to put a seat belt on a passenger.

One of those, Dondi Johnson, died of a fractured spine in 2005 two weeks after he was arrested for urinating in a public street and transported by van. Johnson’s family won a $7.4 million judgment that was reduced to $200,000, the legal cap for such cases. Family lawyer Kerry D. Staton said Johnson was seated alone in the van with his hands cuffed behind him and no seat belt to restrain him.

It is police policy that all arrestees must be buckled in during transport. The policy, updated just nine days before Freddie Gray was injured, states “all passengers, regardless of age and location, shall be restrained by seat belts or other authorized restraining devices.”

An attorney representing one of the six officers involved in Gray’s arrest said it can sometimes be difficult, or even dangerous, for officers to belt prisoners if they’re agitated.

“It is not always possible or safe for officers to enter the rear of those transport vans that are very small, and this one was very small.”

But Police Commissioner Anthony Batts said Thursday that here are no circumstances under which a prisoner should not be wearing a seatbelt during transport and “that’s part of our investigation.

“Much like any other vehicle, you seatbelt people in and it’s our responsibility to make sure people are safely transported,” Batts said, “especially if their hands are behind their back.”

Gray fled on foot and was captured on April 12 after an officer “made eye contact” with him outside a public housing complex, police said. Videos show Gray screaming on the ground before being dragged, his legs limp, into a police transport van. Witnesses said he was crying out in pain.

Authorities say they do not know how, or exactly when, Gray suffered the fatal injury.

Batts said another man who was in the van during the tail end of Gray’s ride told investigators that Gray was “was still moving around, that he was kicking and making noises” up until the van arrived at the station. Batts said the man also said the driver did not speed, make sudden stops of “drive erratically.”

But Batts was careful to say that the investigation includes “everything the officers did that day.”

On Thursday protesters briefly scuffled with police, shouting at them and throwing objects. Police said on their Twitter feed that at least two people were taken into custody for disorderly conduct and destruction of property. The protesters also surrounded a police transport van, similar to the one Gray was put in after he was arrested. Outside of the Western District station house protesters gathered peacefully, while more than 50 officers manned barricades.

More protests are planned for the weekend. On Saturday demonstrators are expected to gather at both City Hall and the site of Gray’s arrest in Baltimore’s Sandtown neighborhood.