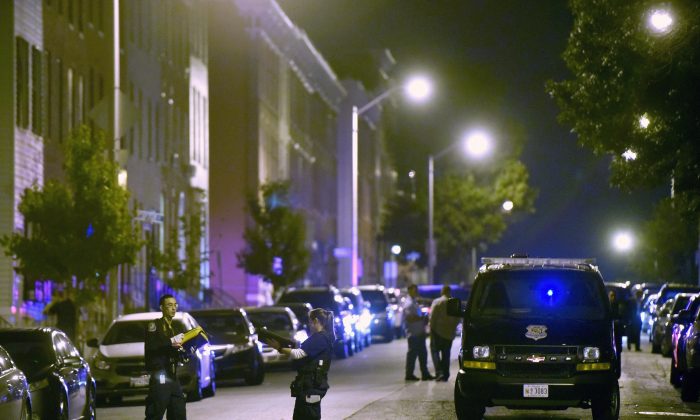 Baltimore police work at a scene where multiple people were shot in Baltimore on Sept. 24, 2016. Police said that none of the shootings were fatal. (AP Photo/Steve Ruark)
Crime and Incidents

BALTIMORE—Three gunmen shot and wounded eight people including a 3-year-old girl on an east Baltimore street Saturday night, police said, adding the suspects fled and the victims were all expected to survive.

The shooting erupted outside some rowhouses about 8:30 p.m. after the three armed men converged on the group from different points, Baltimore Police Commissioner Kevin Davis said at a news conference.

Davis, who went to the scene, said the shooting was a premeditated act of retaliatory violence in response to a Labor Day weekend shooting in which a man was fatally shot and two women were wounded, one of them pregnant. He did not immediately explain how investigators believed the shootings were linked.

Davis said the victims could have recognized the gunmen but authorities haven’t immediately been able to identify the suspects and were still searching for them hours afterward.

According to the commissioner, one of the armed men emerged from an alley and two others ran down the street, stopping just short of the victims before they opened fire. He added that the 3-year-old girl and her father were standing a slight distance away from the others and that the child was not an intended target.

Authorities have said one of the attackers had a shotgun and the other two had handguns.

Davis said that in addition to the girl, one of the victims was a woman and the rest were men. The adults ranged in age from 26 to 39.

Baltimore Police Spokesman T.J. Smith tweeted earlier that none of the injuries was life-threatening.

Police cordoned off at least three city blocks late Saturday and were keeping bystanders away as the police commissioner stood with detectives at the scene. Nearby, detectives used flashlights to search overgrown grass in an alley near the shooting scene. Police cars also blocked a nearby intersection.