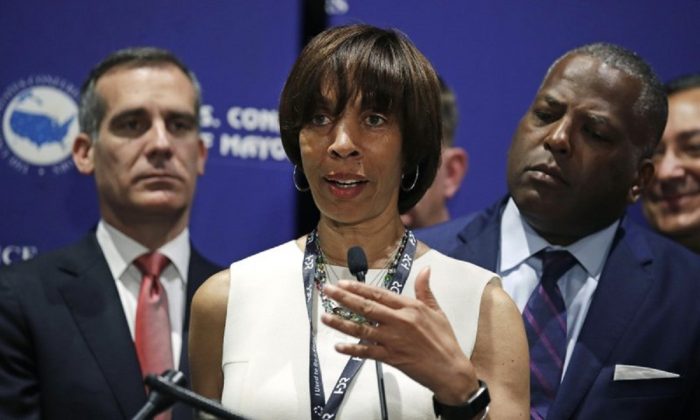 Baltimore Mayor Catherine Pugh addresses a gathering during the annual meeting of the U.S. Conference of Mayors in Boston, on May 2, 2019 .(Charles Krupa/AP Photo)
US News

Baltimore Flush With Federal Cash, Can’t Tell Where It All Went

Adding to the barrage of criticism of prominent Baltimore Rep. Elijah Cummings (D-Md.), President Donald Trump recently said “billions and billions” in federal assistance to the city has been “stolen.”

Plenty of federal dollars flow to Baltimore every year, but what happens to all of it is hard to determine, since the city has long had a problem tracking its dollars.

“What Elijah Cummings should do is, he should take his [House] Oversight Committee, bring them down to Baltimore, and invest all of them and really study the billions and billions of dollars that’s been stolen,” Trump told reporters upon his departure from the White House on July 30.

He suggested the same should be done for “other Democratic-run cities.”

In 2018 alone, $16 billion in federal money went to Cummings’s 7th Congressional District, said Lynne Patton, regional director for Housing and Urban Development, during a July 30 Fox News interview. The district includes West Baltimore, parts of the city’s north and downtown, as well as some surrounding towns and suburbs.

A large chunk of that sum (more than $7 billion) went to Medicaid and CHIP, subsidized healthcare for children and the poor, according to USASpending.gov. Although the funds went to an agency based in Cummings’s district, it appears that it’s the allocation for the entire state. About 20 percent of the money would have been slated for the city, based on 2014 Medicaid enrollment data (pdf).

The city government has long failed to account for how it spends state and federal grant money. A 2014 audit revealed bookkeeping so deficient, it wasn’t possible to track what $40 million in grants from federal, state, and other sources was spent on.

The 2018 audit found similar problems: “Grant money coming into government coffers is not balancing out with what city agencies are spending,” as the Baltimore Sun put it.

Baltimore auditor Audrey Askew, who came a year earlier from a private auditing firm, warned the city could lose access to grants, which make up about a sixth of its $2.8 billion budget. A year later, however, Askew abruptly resigned, offering only a cryptic explanation.

”Baltimore will never know why, but they know why,” she told BaltimoreBrew, declining to specify who “they” were.

“I am a person of integrity, and I am honest. Anything that alters that, I don’t do.”

A source told the news website that Askew was getting incorrect or unsubstantiated numbers from the city’s Finance Department and was pressed to “write-off” some federal grant money to balance the books.

Two months later, on April 25, the FBI and IRS raided offices in the City Hall and the home of then-Mayor Catherine Pugh. She was already on an indefinite leave of absence for about three weeks amid a self-dealing scandal.

While she sat on the board of the University of Maryland Medical System, the company, which receives substantial public funding, bought 100,000 copies of her 20-page children’s book for $500,000. That effectively made her one of the most successful self-published authors in the world, KMPH reported.

Baltimore is one of the most troubled cities in the United States; it’s America’s most violent city with a population over 500,000 and there’s no sign of improvement. So far this year, there have been some 200 homicides, a 22 percent increase from the same period last year. Shootings are up as well, by 30 percent, the city’s police union said in a July 29 tweet.

Baltimore’s unemployment rate is 50 percent above the national average. The city has some 16,000 uninhabitable houses, many of them dilapidated ruins, and many that are regularly broken into and used by drug addicts, the homeless, and criminals.

Several locals from one of the most depressed areas told The Epoch Times that they see little or no support from the city.

Meanwhile, the city has more than 13,500 employees, with a total payroll over $821 million annually, according to Open the Books, a federal spending watchdog. That’s about twice as many public servants than employed by Oklahoma City, a metropole of somewhat higher population.

“The deteriorating conditions in Baltimore serve as a great case example,” said Adam Andrzejewski, Open the Books founder and chief executive, in an email.

“People need to take individual responsibility for their own lives. More and more government spending isn’t the answer.”