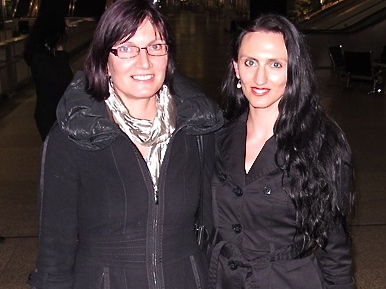 “I told myself that we had to see this show once I came across advertisements about the Shen Yun performance. And our decision was absolutely right. It was amazing,” Ms. Wilhelm said.

“What we have seen tonight was brilliant and unique,” Mr. Wild said.

“I saw with much joy in my heart that the Chinese culture is still alive and is shared with the rest of the world. This is something extraordinary.

“The show was great when viewed from the perspective of art, but equally important when seen from a cultural viewpoint. For that I’m so grateful for having seen this show tonight,” he said.

Ms. Wilhelm, as a ballet dancer and teacher, said, “Everyone that loves dance or ballet will enjoy this show.”

According to Shen Yun’s website, “At the core of Shen Yun’s performances is classical Chinese dance with China’s numerous ethnic and folk dance styles rounding out the evening.”

“Most beautiful are the dancers,” said Mr. Wild. “They were so animated! One can see the facial expressions and movements of the artists, which allows for an understanding of the story. This was wonderful. Truly exceptional.”

Ms. Wilhelm added: “I have been teaching for six years in South Africa. … Shen Yun should also come to South Africa.”

“The entire evening was truly unusual,” said Mr. Wild. “There is something for everyone, for the entire family.”

Ms. Wilhelm added, “It was an experience one never forgets.”