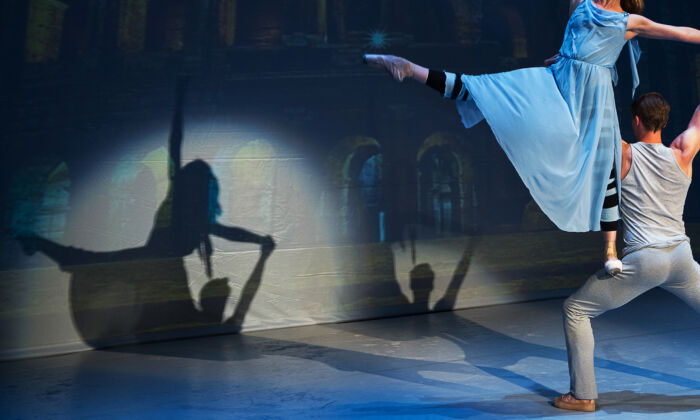 Female ballet dancers at the University of Cincinnati have complained of sexual harassment during routines by a male dancer. File photo from 2022. (Zuzana Gogova/Getty Images)
US Features

A University of Cincinnati ballet performance looked like “a grab fest,” a sexual-harassment lawsuit claims, alleging that a male student dancer repeatedly touched ballerinas inappropriately during rehearsals and performances.

The federal suit also alleges that the University of Cincinnati’s ballet program “failed to take adequate steps” to ensure that the female dancers were protected.

The federal lawsuit, filed June 30 on behalf of two female dancers, alleges that officials at UC and its College-Conservatory of Music (CCM) treated the women’s complaints with “deliberate indifference,” and violated Title IX.

The University of Cincinnati’s ballet program declined to comment.

That U.S. civil rights law, which bars sex-based discrimination in federally funded education programs, has been in force for a half-century.

Administrators at UC and CCM are accused of shielding “a ‘star’ male ballet dancer at the expense of numerous female ballet dancers,” and creating “a campus environment that was hostile to women and an elevated risk that they would be subject to sexual harassment,” according to the suit.

The lawsuit omits the names of the women who filed suit, as well as the name of the accused male dancer.

All three were students at CCM.

The suit alleges that the male dancer inappropriately touched both women’s breasts during “lifts” and lowered one dancer very slowly, so she felt his private area “slide along her back,” in such a way that she “wanted to physically jump out of his arms.”

The UC ballet case is adding to “a continuing national controversy” over the way that American colleges and universities respond to allegations of sexual misconduct and sexual assaults, the suit says.

It also fits into a “newly emerging pattern” of Title IX suits alleging that procedures for processing complaints were unfair, causing universities to reach the wrong decision, said KC Johnson, a scholar and author who has been tracking Title IX cases for more than a decade.

Johnson, a history professor at Brooklyn College and the City University of New York, said he was unaware of any other Title IX lawsuits involving ballet at a university.

Unlike campus sports teams, which are gender-segregated, ballet requires mixed-gender physical interaction, Johnson noted, which adds to the unusual nature of the UC ballet case.

The male dancer who was blamed for inappropriate touching at UC had asserted that any such touching was accidental, the suit says.

He was found “not responsible” for alleged misconduct in a university hearing earlier this year—a process that failed to follow UC’s own Title IX policy, the suit claims.

The university allegedly blocked witnesses who could have attested to the alleged pattern of the male dancer’s interactions with his female counterparts, the suit said.

Officials from UC did not immediately respond to The Epoch Times’ request for comment on July 5.

An attempt to obtain comment from a lawyer who advised the male during the university hearing was also unsuccessful.

Joshua Adam Engel, the attorney who filed the lawsuit, said his two female clients had both been studying ballet for many years, so they know the difference between an unintentional, incidental touch, and a deliberate one.

The situation reminded Engel of a quote from an often-cited U.S. Supreme Court justice, the late Oliver Wendell Holmes Jr.: “Even a dog distinguishes between being stumbled over and being kicked.”

Engel also pointed out that, when his clients had been subjected to accidental touches in the past, other male dancers would apologize for the apparent mistaken hand placement—something this male dancer did not do.

Engel has filed many Title IX cases across the nation, including several others against UC.

Engel has advocated on behalf of both accusers and the accused, he said.

The accused male dancer, referred to as “John Doe,” received a scholarship to attend CCM.

He was selected for “favored and starring roles in many productions and was featured in a promotional video produced by Cincinnati Ballet,” a professional dance company, the suit says.

He had participated in the Cincinnati Ballet’s community outreach program, which includes curriculum and dance training for young people.

Other female dancers at Cincinnati Ballet had accused Doe of sexual misconduct prior to his enrollment at UC, the lawsuit says, at least one of whom “sought a protection order” against him in Hamilton County Common Pleas Court.

Therefore, the suit says, “the accusations against John Doe were common knowledge in the Cincinnati dance community.”

Cincinnati Ballet did not immediately return a reporter’s phone call and did not respond to an email seeking comment on July 5.

An experienced ballet instructor who viewed a video of a performance with Doe and one of the female dancers was quoted in the lawsuit stating: “This ballet is one grab fest after another. If I had been in the audience, I would have been very uncomfortable.

“I am appalled with what these young ladies have had to endure at the hands of this partner.”

UC’s alleged failure to respond to the women’s claims of harassment hurt the women’s “academic and professional reputations,” and will cause the women “diminished earning capacity, lost career and business opportunities,” the suit says.

The women also suffered “humiliation, embarrassment, inconvenience, mental and emotional anguish and distress and other non-economic damages,” the lawsuit says.

Filed in U.S. District Court for the Southern District of Ohio, the lawsuit seeks unspecified monetary damages, along with court costs, attorney’s fees and other expenses.

More than a decade ago, the University of Cincinnati adopted policies and procedures to respond to allegations of sexual assault on campus under “pressure” from the U.S. Department of Education’s Office of Civil Rights, the suit says.

In response to an April 2011 letter from that office, stressing the importance of investigating and resolving sexual misconduct claims, “many schools changed their sexual assault and sexual harassment policies … (and) shifted the focus more on victim advocacy.”

Over the years, its response to sexual misconduct allegations seemed to shift along with changes in presidential administrations, the suit says.

At that time, “colleges and universities, including UC, were scared of being investigated or sanctioned,” which could include the federal government filing lawsuits or stripping the institutions’ Title IX funding.

In 2017, the education department withdrew its 2011 admonitions and sent a new letter to institutions. The letter stated that prior actions “may have been well-intentioned, but … led to deprivation of rights” for both accusers and the accused.

The letter also accused many schools of establishing procedures that “lack the most basic elements of fairness and due process, are overwhelmingly stacked against the accused, and are in no way required by Title IX law or legislation.”

In 2020, the U.S. Department of Education released a final rule under Title IX, prescribing “a transparent grievance process that treats accused students as innocent until proven guilty … and requires the school to provide a hearing process where accused students may question adverse witnesses.”

Despite those efforts, a “backlash” persists, the lawsuit says, with many accused students filing complaints with the education department’s Office of Civil Rights.

The suit claims UC has “a pattern” of failing to take female assault victims’ allegations seriously.

The university also has repeatedly failed to respect the due-process rights of the accused and the accusers, the suit says.

In fact, the suit asserts, federal education authorities have investigated UC “for the manner in which it investigates and adjudicates allegations of sexual assault and harassment.”

The student newspaper, The News Record, has reported that the university issued “crime alerts” for only five of 24 reported on-campus rapes during 2018-19, according to the lawsuit.