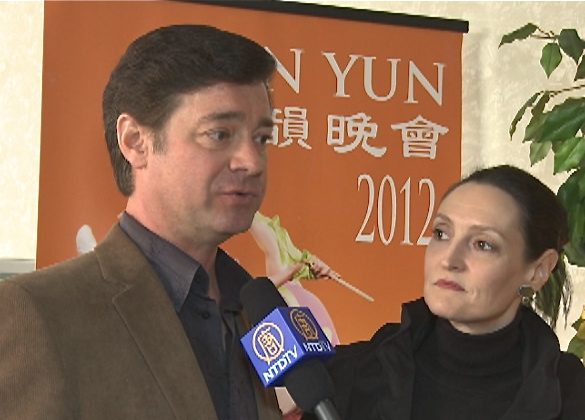 TOLEDO, Ohio—A man and woman who are artists and city leaders saw Shen Yun Performing Arts Touring Company at the Stranahan Theater on March 18. Each was moved and thrilled by the experience.

Ballet dancer with the Toledo Ballet, founder/owner of the 20 North Gallery, developer and historic preservationist Eric Hillenbrand said the performance was “just magnificent.” The choreography was “heroic … the whole story line behind the performance was very powerful, very moving.”

Condessa Croninger is the theater art director for 20 North Gallery, and also works with the Toledo Ballet. She was chosen as one of Toledo’s 20 under 40, an award which is “Saluting Toledo’s Young Dynamic Leaders,” according to its website.

Ms. Croninger said Shen Yun “is truly a breathtaking celebration of the freedom of expression. I was amazed, blown away. And what I think impressed me most was not only the quality of the soloists, but how the corps seamlessly worked together with the soloists. It was far beyond what is typically seen on stage. It’s very, very beautiful choreography, and excellent dancing.”

Chinese classical dance contains “China’s rich cultural traditions, which allow its movements to be deeply expressive, such that the personalities and feelings of characters can be conveyed with unparalleled clarity,” according to the program.

“There was a unique Chinese character that merged so well with the universal classical steps. It all flowed together seamlessly,” said Ms. Croninger.

About one dance, Sleeves of Silk, she said: “I was just awe struck by the command that the dancers had over the costuming that they used, and how they were able to be so fluid and yet so tightly control the perimeters of the dance. It was beautiful.”

Mr. Hillenbrand analyzed the theatrical production and its effect on the audience. He said. “That’s where the visual impact comes in, starting off with the drum line, in the very opening number, that to me, that has a very theatrical connection with the audience. And the screen work, you know that just kept pulling you in, you could hear the audience every time somebody would jump off the back, then float out, the audience was still like, ‘Wow!’ … You just kept being drawn to it, you almost wanted to jump off with them.”

Shen Yun’s digitally projected backdrops “are magical windows to completely different realms,” according to its website. “The digital projection infinitely expands and transforms the stage.”

Ms. Croninger said that when dancers appeared to fly into the backdrop, the excitement was catching. And Mr. Hillebrand said: “Oh, it was, it was, and the whole audience, you could just hear them moving and just wanting to see them traveling off like that, it was an incredible effect.”

Both saw the company in 2010, and spoke of how moving they found that performance.

This all-new show from the New-York based artists touched them just as much as in 2010. Mr. Hillebrand said the music touched his emotions. “I enjoy singing, and I love to sing, and just being able to listen. I was particularly drawn in by the singers themselves. I mean the powerful way in which they emoted these incredible songs. I was a mess. I was crying a lot, it was strong, so powerful.”

Ms. Croninger said seeing the projected, translated lyrics was good and that she felt she could have experienced the meaning of the songs even without knowing the words, because “to see the transcript, the subtitles of the words, did give it greater meaning, but the singing itself was so powerful, so heartfelt by the singers that it truly wasn’t necessary, that the audience could feel the intenseness of the belief from the singers.”

Each said they appreciated seeing such a skillful live performance. “When we were seeing the dancers on the stage, performing these amazing feats of dance and athleticism, that, in a world where so much is digitally manipulated, sometimes I think it wasn’t completely clear to everyone that what we were seeing on the stage was truly there, it seemed too perfect to be real,” said Ms. Croninger.

“Very much so,” said Mr. Hillebrand. “The naturalness of the dancing and the singing. I mean as a total performance, you so rarely see that anymore; so much of it is controlled and contrived and created or enhanced digitally, and to see this live, it is very exciting.”