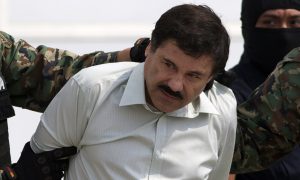 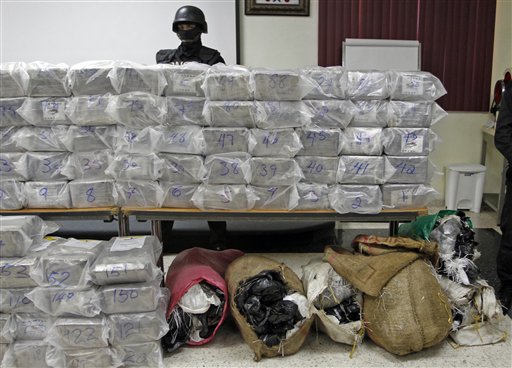 In this Oct. 8, 2013 photo, a Dominican anti-drug police officer stands behind packages of seized drugs during a news conference at the National Drug Control Agency in Santo Domingo, Dominican Republic. The Dominican Republic is now the region’s biggest transit point for drugs. A U.S. military assessment projected that 6 percent of the cocaine destined for the U.S. this year will pass through the Dominican Republic alone. (AP Photo/Manuel Diaz)
Europe

BELGRADE, Serbia—A Serbian court has sentenced a Balkan drug lord to 20 years in prison for smuggling 5.7 tons of cocaine from South America to Europe.

Darko Saric, who had insisted he was innocent, didn’t attend the reading of the verdict Monday at Serbia’s Court for Organized Crime. Eighteen other gang members were sentenced to up to 20 years in prison, while three were acquitted.

The 44-year-old Saric was charged with leading a powerful criminal organization that smuggled cocaine from Colombia, Argentina and Uruguay through Balkan countries to Western Europe in 2008 and 2009.

In October 2009, a shipment of 2.7 tons of cocaine Saric’s group organized was intercepted near Uruguay’s coast in an international police action that included U.S. Drug Enforcement Administration agents.