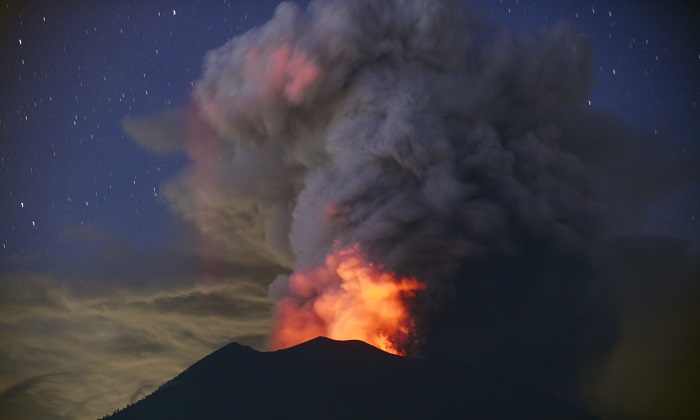 As tens of thousands of people attempt to flee an erupting volcano on the tourist island of Bali, a U.S.-based volcanologist has warned it has all the tell-tale signs of becoming much worse.

With Mt. Agung volcano spewing plumes of volcanic ash 5.5 miles (8.8 kilometers) into the sky, Indonesian authorities have ordered the evacuation of 100,000 residents living near the volcano due to fears of a major eruption.

“This is an eruption, this is 100 per cent an eruption,” Dr Janine Krippner told news.com.au.

For the first time in 50 years, Mt. Agung erupted early last week and according to reports, lava emerged over the weekend which Krippner said is a warning sign of things to come.

“Lava is coming out of the volcano, there’s definitely enough to cause trouble. This can get much worse, you can’t outrun this,” said Krippner.

Krippner has been following the volcano’s rumblings since September when the number of tremors recorded at Mt. Agung reached around a thousand per day.

The challenge now is that the lid of the volcano has been lifted and there is nothing stopping the molten rock.

“The danger is that this is now an open system. Before, it was a closed system which means that there was no easy open access between the magma and the surface,” said Krippner.

She added that a combination of factors have steadily increased the pressures that are driving the eruptions.

“It’s like shaking up a bottle of Coke and then taking the lid off,” she said.

According to the Discover blogsite, volcanic mud flows — known as lahars — have been seen coming out of the volcano.

Krippner said that pyroclastic flows — fast-moving currents of hot gas and volcanic matter — are the ones to watch out for.

“If those come, they can travel 10km within three minutes,” Krippner said. “You can’t outrun these.”

Pyroclastic flows killed many of the nearly 1,600 people killed when Mt. Agung last erupted in 1963.

“The concern is we know the history of Agung and knowing what a volcano has done in the past, you know what it can do in the future,” she said.

If a major volcanic eruption does take place on Bali it also could have the capacity to cool down the world’s temperature, if past history is anything to go by.

Vox reported that the 1963 eruption — which emitted about 6 million metric tons of sulfur — dropped global temperatures between 0.1 and 0.2 degrees Celsius for a year.