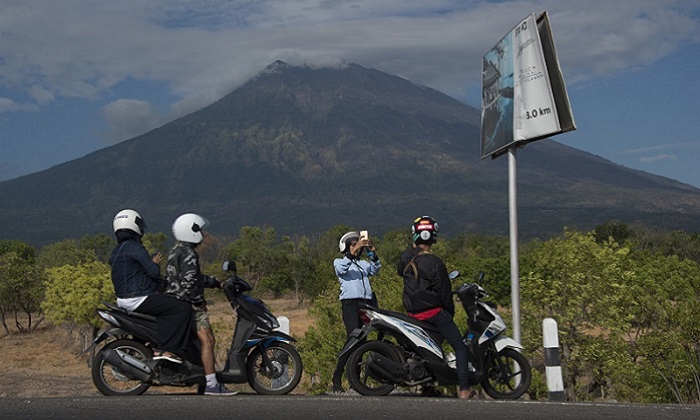 With Bali’s Mt. Agung volcano in the background, a Balinese woman takes a selfie of herself on Oct. 3, 2017. The volcano erupted on Nov. 22. (Bay Ismoyo/AFP/Getty Images)
Asia & Pacific

The initial eruption of a large volcano on the Indonesian tourist island of Bali has been small but a larger one could follow, warns a U.S.-based volcanologist.

Bali’s Mt. Agung erupted on Nov. 21, two months after some 150,000 local residents living near it were evacuated, reported the Australian Broadcast Corporation (ABC).

Dr. Janine Krippner, who has been following the volcano’s rumblings since September, said the small phreatic eruption had been anticipated.

“They said if something did happen it was likely to be small — it might be larger afterwards but it would start out small,” said Krippner.

“A phreatic eruption is basically one where there is no magma involved. We’ve all seen the steaming, the steam plume at the top of the volcano,” she said.

“And what can happen with volcanos is some of the steam can get trapped, and it can be pressurized, and it can cause an explosion.”

In September, Indonesian authorities ordered the evacuation of residents living near Mt. Agung which last erupted in 1963. That eruption resulted in the deaths of nearly 1,600 people, many of whom were killed by clouds of hot gas.

The evacuation zone currently around Mt. Agung is 6-7.5 kilometers (3.7 – 4.6 miles) from the crater. There is no reason yet to broaden the zone, said Dewa Made Mertayasa who is the head of local efforts monitoring the volcano.

“The dangers are for [the people] living within a 6km to 7.5km radius from the crater,” Mertayasa told the ABC. “That evacuation zone should remain clear because the ash clouds are heading in that direction,” he said.

“The people should be on alert, as the volcano has been spewing ash cloud — though in small size and non-pyroclastic — but still the ash will affect the people surrounding Mt. Agung.”

The last time Mt Agung erupted was in 1963! yesterday at dinner, we saw it erupt in front of our eyes! ???? #bali #balivolcano pic.twitter.com/cYNI9xKP4O

Local police officials said there has been no sign of panic on the island in response to the eruption. Bali’s airport remains open and tourist areas are currently deemed safe.

Reaction to the volcano’s activity over the past two months has cost the island’s economy at least US $110 million in lost tourism and local productivity, reported the BBC.

Indonesia sits on the so-called Ring of Fire which is prone to earthquakes and volcano activity.