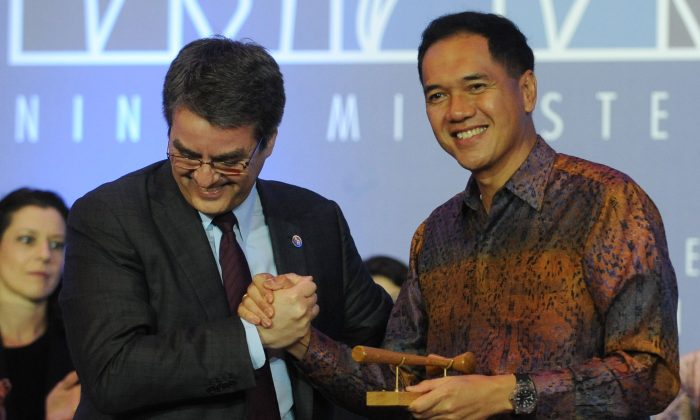 Bali Boost: The WTO Lives, Snatched for Now From Jaws of Defeat

Bali agreement, with many promises, is a start, but leadership and reform are required

It would be churlish not to congratulate the WTO and especially Roberto Azevêdo, its dynamic director-general, for successfully passing a “Bali package” at the Indonesian resort well past the 11th hour on Dec. 7. The WTO Doha Round, launched in the Qatari capital in 2001, a few weeks after 9/11, had become a synonym for failure: failure of the WTO and failure to move forward an inclusive agenda of globalization.

It was expected by many, including this author, that the ninth ministerial conference would follow the pattern. Instead Bali succeeded, at least in the sense that, unlike previous ministerial conferences, it did not collapse. The question is whether, as some exuberantly declare, the Doha Development Agenda has been brought back to life or, as others fear, the state of suspended animation has been extended by temporarily rebooting the life-support machine.

The trading system put in place after World War II with the establishment in 1947 of the General Agreement on Tariffs and Trade, or GATT, contributed enormously to bringing peace and prosperity to the nations of the North Atlantic. This was when the world was divided in three: the first world consisting of rich market-oriented economies; a second world of state-led central-command economies; and a third world collection of basically poor countries, many of which—including Brazil, Argentina, Indonesia, and India—were practicing import-substitution industrialization policies. Thus the GATT was essentially an elite club of OECD countries, with Canada, the United States, Europe, and Japan, what was referred to as the “quad,” calling the shots. This was fine because other countries were not interested. After the last GATT Uruguay Round in 1994, the institution was reformed and recreated the following year into the World Trade Organization.

The first director-general, the late Renato Ruggiero, referred to the WTO as the first true institution of this new phase of globalization. As the Soviet empire, hence the second world, imploded and major market-oriented reforms occurred in third-world countries, the world gradually unified into one global integrated market economy with only a handful like North Korea opting out. Ruggiero warned early on, “We have gone from a divided world to an integrated world; and an integrated world is much more difficult to manage.” And so, that has proved to be the case.

In 1995, the WTO counted some 90-member states; at Bali there were 160. But apart from the membership increase, all has not developed smoothly. The 1999 WTO ministerial meeting in Seattle descended into total fiasco. Then Director-General Mike Moore expressed the prophetic fear that the WTO would become the “League of Nations” of the 21st century world economy—impotent and irrelevant.

In 2001, China was admitted and the ministerial meeting was held in Doha. Developing countries from the South wanted a piece of the global trade action, but in areas where they had comparative advantage: in essence agriculture, raw materials, and labor intensive goods, precisely areas where the quad had maintained high tariffs, subsidies, quotas, exclusions, and other forms of trade distortions that were especially discriminatory against developing countries. The South clamored for a level playing field, something they would not be granted because of lobbies and vested interests in the countries of the North.

Nevertheless in Doha, in great part because of the brief and ethereal moment of global solidarity in the wake of 9/11, not only was a new round launched, but it was called the Doha Development Agenda, or DDA, thus understood, by countries of the South, as development-oriented, aimed at eliminating discriminatory trade distortions.

The spirit of global cooperation and development orientation disappeared before the ink was dry. At the 2003 WTO ministerial in Cancún talks collapsed for a variety of reasons, but largely because of Washington’s refusal to cut massive subsidies allocated to its powerful cotton lobby, thereby undermining more cost-efficient producers from developing countries, especially Africa’s “cotton four”—Benin, Burkina Faso, Chad, and Mali.

In the decade since Cancún, attempts to restore the DDA have failed. While the North-South divide remains, other issues complicate the global trade picture, two of which stand out: The first is the absolutely amazing, unexpected rise of China as a global trade superpower. Another is that technology has made production of goods and services in the form of global value chains highly dispersed in a totally new paradigm.

The DDA was launched at a time when these transformations had not yet occurred. Negotiations were fought on yesterday’s battlefields. The world has changed immensely while Doha was a constant.

Unable to adjust, lead, or compromise, and thereby frustrated by no longer being able to dictate the global trade agenda, the established powers opted to play in regional trade deals and then in another more exclusive trade sandbox—in the form of what’s been called the “trade mega-deals.” There are two especially big ones: TTIP, the Transatlantic Trade and Investment Partnership, composed of the United States and EU, and The Transpacific Partnership, composed of a dozen Pacific countries, led by the United States. Both exclude the new emerging trading powers—China, Brazil, India, South Africa—along with the poor countries, especially those from southern and central Asia and Africa. The intention of these mega-deals is not only to liberalize trade among members, but also, perhaps especially, to write new trade rules for the 21st century.

So in the space of not much more than a decade, the world that transformed from a three-part division to an attempt at integration is back to a new two-part divide with the essentially rich “in” countries, and the “outs”—emerging, developing, and poor countries—with the former being rule-makers and the latter rule-abiders.

There is no guarantee that these mega-deals will see the light of day. But there’s been a trend in recent years—from global trade integration to fragmentation. Of course, trends need not be irreversible. Will Bali be seen as a reversal of these trends of global fragmentation in favor of greater global integration? One must hope, but a closer look at the Bali package suggests it is unlikely.

Much of the Bali package is rhetoric, not yet translated into implementable concrete reality. More fundamentally, it remains to be seen whether the spirit of global cooperation, the setting aside of narrow national interests in favor of improving the global commons, will prevail sufficiently to generate post-Bali momentum. Bali is Doha-lite. One reason for its “success” is the view among U.S. trade officials that none of the provisions are likely to require approval of Congress, in these days an almost-certain graveyard for trade deals, perhaps even for TPP and TTIP.

Optimists celebrate that, thanks to Bali, trade multilateralism lives to see another day. The fear was that a Bali failure would not only have put a last nail in the Doha coffin, but also hastened the demise of the already fragile rules-based multilateral trade regime. It is a victory of sorts, but perhaps dangerously so of the pyrrhic variety. The tattered global trade fabric is in desperate need of radical reform. Mindsets, the culture of 21st century globalization, must change and implement radical reforms to adapt to the new realities and thereby seize the opportunities for a more equitable, inclusive, and sustainable globalization.

So Bali is not the end nor, to paraphrase Winston Churchill, is it the beginning of the end, but one must hope perhaps the end of a long, tortuous beginning. Great effort, leadership and vision are required to build solid foundations for a 21st century trade regime.