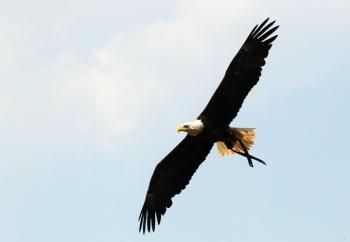 A bald eagle is seen prior to the start of the game between the St. Louis Cardinals and the Chicago Cubs on May 30, at Wrigley Field in Chicago, Illinois. In the 48 contiguous states, recently, Vermont was the last state to see the eagles after being endangered for 40 years. (Jim McIsaac/Getty Images)
US

Nicholas Zifcak
View profile
Follow
biggersmaller
Print
After 40 years on the Endangered Species List, bald eagles in America made it off the list in 2007. But not for the State of Vermont, where the symbolic American bird was still struggling to recover. Earlier in July, Vermont announced the bald eagle's return to the state.

In July, the Vermont Fish and Wildlife reported that nine bald eagle nests were sighted in Vermont, with seven pairs of bald eagles confirmed to have built nests in the state. Five pairs are successfully raising a young eaglet. Two of the nests failed, one because of a heavy snowfall in April. Why the other nest failed is unknown. If these five young bald eagles do well they should be leaving the nest sometime in July.

Vermont still lists the bald eagle as endangered because the eagles have not firmly re-established themselves in the state. In contrast, neighboring New York and New Hampshire bald eagle populations have grown steadily. In 1963 there were only 417 breeding pairs of bald eagles in the United States. In 2007 there were nearly 10,000 pairs in the 48 contiguous states. The eagles are returning to Vermont last of all; 2008 was the first year the eagles successfully nested and produced offspring in Vermont.

U.S. Fish and Wildlife Service and the Commerce Department’s National Marine Fisheries Service (NMFS) administer the Endangered Species List. It was established when Congress passed the Endangered Species Act (ESA) in 1973. The purpose of the law was to protect America's natural heritage, which has an “esthetic, ecological, educational, recreational, and scientific value to our Nation and its people.”