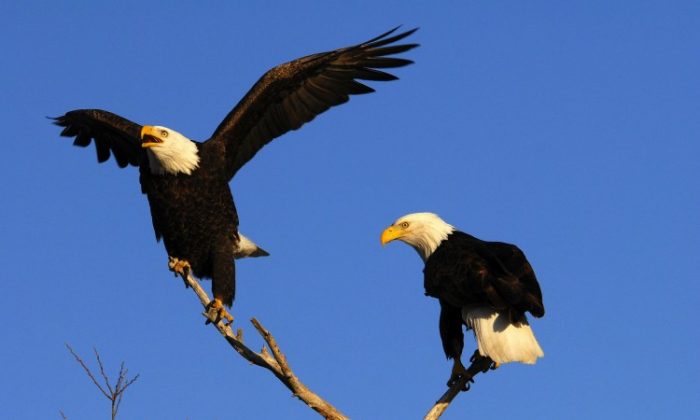 A pair of bald eagles perched on a branch. The American Bald Eagle species is flourishing in the Northwestern United States, but lasting effects of past threats to their survival remain. (Dave Menke/U.S. Fish and Wildlife Service)
US

Bald Eagles Are Back, But Not Out of the Woods

The return of the American bald eagle has been described by conservationists as one of the most triumphant recoveries in modern wildlife. As pesticides have kept the eagles’ unborn eggs from developing in years past, strong conservationist efforts from both public and private sponsors have stepped up to keep these birds from disappearing.

However, the eagles are not out of the woods yet, as many conservationists groups are keeping a close eye and pressuring government agencies for more protective efforts.

The bald eagle was chosen as the symbol of the United States during the inception of the country. However, with Western development in the 1800s combined with industrialization, the bald eagle, like many animal species, became threatened.

One of the early threats to the eagle came from hunters and ranchers who killed the birds to keep them from feeding on their chickens and livestock. But the biggest threat to the eagle was a pesticide called DDT that ran into local waterways, poisoned fish that the birds ate, and caused the females to lay eggs with brittle shells.

Throughout the 20th century, the bald eagle population continued to dwindle. In 1940, the Bald and Golden Eagle Protection Act was enacted, and it was enforced by the U.S. Fish and Wildlife Service (USFWS). The act states that no one shall hunt, disturb, or otherwise interfere with these birds.

During the formation of this country, there were approximately 100,000 nesting pairs, and by 1963 there were only about 400. DDT was officially banned in 1972.

“We were down to about 20 nesting pairs in the state of Oregon in the ’50s and ’60s, and then on into the ’70s was when we started our recovery,” said wildlife biologist Ralph Opp, according to “This American Land,” episode 210, on PBS.

The Klamath Basin in Southern Oregon is considered by birdwatchers to be one of the best places in the United States to spy on the bald eagle, which is notorious for not letting humans get too close.

Every winter, 700–800 bald eagles inhabit the basin. The eagles fly south from the Northern Territories in Canada as the temperature drops in the winter.

In 1976, Opp discovered a forest shelter where the eagles dwelled nightly, according to PBS. Opp pushed to have that land federally protected, and now the land is known as the Bear Valley Wildlife Refuge.

“We weren’t aware, here anyway, that night-roost was that important, and fortunately we discovered that in the ’70s and were able to protect it,” said Opp. “So, it is a federal bald eagle refuge—one of the few in the country.”

However, eagles farther south toward the Columbia River are in a different situation. Approximately half of all eggs fail to produce eagle chicks—a mystery that has plagued biologists since the ’80s.

“They’re producing about half the number of eagles that they should produce,” said Jeremy Buck, biologist with the USFWS, according to PBS. “We’ve been trying to track down since the 1980s why that’s the case.”

After painstaking egg recovery and analysis by Buck, the failed eggs were found to still contain DDT, which he believes has settled in sediments along the Columbia River. Numbers of eagles in this area of Oregon are on the rise, but not as fast as in other areas.

Additionally, in other areas of North America such as Arizona, environmentalists and local tribes, like the Tonto Apache Tribe, believe that the USFWS is not doing enough to protect the eagles.

November 2012 saw the Center for Biological Diversity and the Maricopa Audubon Society filing a lawsuit against the USFWS for ignoring or discounting information regarding Arizona’s approximately 60 nesting pairs, according to the Payson Roundup newspaper.

The groups believe that the Arizona eagles are a subpopulation of the bald eagle and demand the reinstatement of the eagles as an endangered species.

According to the Roundup, USFWS biologists noted that desert bald eagles were “unique because they’re smaller, choose different nest sites, breed earlier, and have other adaptations that set them apart from bald eagles elsewhere.”

Despite what the organization’s biologists think, the USFWS believes that the need to reinstate the classification is unnecessary due to the rising numbers of bald eagles across the nation.