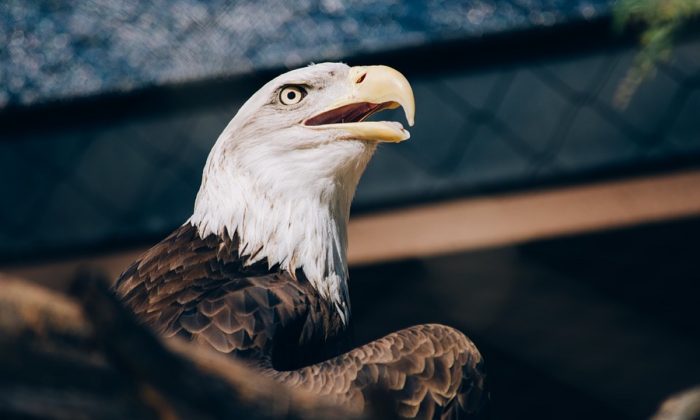 Stock image of a bald eagle. (Free-Photos/Pixabay)
US News

Bald Eagle With Amputated Wing Has Been Stolen From Enclosure: Report

A bald eagle with amputated wing was stolen from Quogue Wildlife Refuge in New York on Tuesday, July 16.

The bald eagle named Sam has been living in the refuge for 31 years after a gunshot injured his wing and it had to be amputated.

“OUR BALD EAGLE WAS TAKEN AND IS MISSING! He will be stressed and cannot survive without our care,” the Quogue Wildlife Refuge wrote in a Facebook post.

“We want him back unharmed. It is a federally protected bird and cannot survive in the wild as he has an amputated wing,” the post read.

Sam is between 34 to 40 years old and is known by many people since he has been living in the sanctuary for three decades.

“They are heartbroken, it is horrible. this bird has been here for 30 years, so many people know him,” she said in an interview posted on the sanctuary’s Facebook page.

The Quogue Wildlife Refuge wrote on Facebook on Wednesday, July 17 that it is working with law enforcement and has no further updates about Sam.

Surveillance video at the wildlife facility shows a man in a baseball cap leaving the sanctuary on Tuesday with a bag at 4:15 a.m. Law enforcement and the sanctuary officials believe Sam was inside that bag, reported News12 Long Island.

“He’s a very strong bird. We don’t even handle him because it stresses him out,” Nelson told the broadcaster. “He likes his space and we are very sad and we are very concerned about this eagle,” she said.

People were shocked and in disbelief at the birds disappearance.

“The Quogue Wildlife Refuge is an amazing gem in our community. They serve the needs of our community through preservation and education…sadly the guilty party knows nothing about that…..#bringsamhome,” one person wrote in response to the refuge’s Facebook post.

“That’s real sad all around. Bald Eagle has been around for a while, this affects a lot of people, and of course the staff at the refuge. Stressful for this bird who needs the proper care and attention, and of course stress on the staff. I hope for a safe return,” wrote one man.

On Wednesday, the sanctuary posted pictures of people leaving written messages at the enclosure where Sam stayed.

“We love you Sammy, hope to see you soon,” read one message written on a ribbon and tied to the bird’s enclosure.

The Quogue Wildlife Refuge has asked the public for help in locating Sam. Anyone with information is asked to call (631) 653-4771 or email info@quoguewildliferefuge.org.

STOLEN BALD EAGLE: A desperate search underway for whoever stole a Bald Eagle from the Quogue Wildlife Refuge. “Sam” is a 35-year-old Bald Eagle. He’s been at the wildlife center since 1988. Police say Sam’s cage was cut and pried open. The facility says the bird has a partially amputated wing and can’t survive without their care. If you have information about Sam’s whereabouts, call Quogue Village Police at 631-653-4791. #baldeagle #quoguewildliferefuge

Quogue Wildlife Refuge is a 300-acre non-profit nature preserve established in 1934. Resident animals are limited to wild animals that have been injured and require human care to survive, according to its website.

“These animals have become educational ambassadors, teaching the public and school groups about native species and how people can help protect wildlife,” the website reads.

Sam was living in an outdoor wildlife complex that was built in 1976, that was later restored in 1995. Besides Sam, it also houses hawks, owls, foxes.